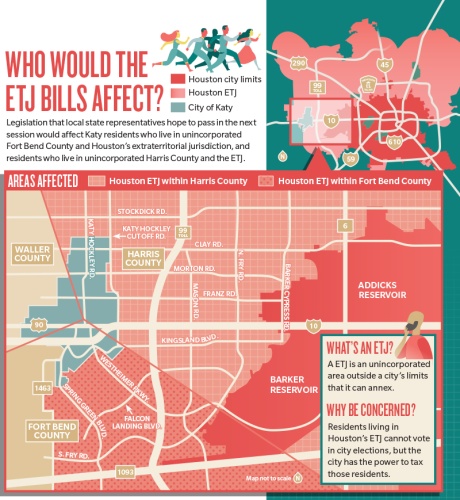 Several local state representatives are working to push similar bills during the next legislative session in January 2019 that could potentially affect hundreds of thousands of Greater Houston-area residents.

Meyers said the bill he is working on with state Rep. Rick Miller, R-Sugar Land, who has agreed to sponsor the bill in the next session, is a locally focused bill that would affect only Fort Bend County residents.

According to Meyers, large cities like Houston with an ETJ that extends far into neighboring suburbs have regulatory power and can impose taxes there, yet those residents have no say in city government. They cannot vote for the Houston mayor or City Council members.

“You are taking away their voice from the standpoint that their elected body [Fort Bend County Commissioners Court] can be overruled by an unelected body [the city of Houston],” Meyers said. “That’s un-American, un-Texan; it’s just not right.”

Meyers said the taxes that are imposed on these areas translate to sales taxes from retail establishments that are possible through limited purpose annexations. According to the Texas Local Government Code, a limited purpose annexation occurs when a city extends regulations in regard to land development and in exchange provides limited services and collects sales tax. Local state representatives said this can be seen with LaCenterra in Katy—sales tax from the businesses there go to the city of Houston, not Katy.

Meyers said the question raised of whether this issue is the same as the idea of no taxation without representation is his whole issue and why he wants the bill to be passed.

“The assumption [of no taxation without representation] is that the only taxes that are going to be levied would be levied by an entity that is subject to the vote of the resident voters,” Meyers said. “But, [the city of Houston] kind of gets around it by allowing these strategic partnership agreements and allowing the cities to quote ‘exercise their limited authority in an unincorporated area.’”

State Rep. Mike Schofield, R-Katy, is also working on his own ETJ bill that would achieve a similar outcome to the Fort Bend County-focused bill but would affect residents living in unincorporated Harris County and Houston’s ETJ.

“All it does is say that if an area that is in the ETJ of a big city has another city closer to it that is willing to adopt it and annex it, that the bigger city lets the area go so that it could become part of a city,” Schofield said.

Schofield said Katy is a perfect example for this legislation to help residents since some residents who reside in Houston’s ETJ and unincorporated Harris County with a Katy address can be denied access to city services.

“The city’s reach shouldn’t exceed their grasp,” Schofield said. They exist to serve their residents, not to get money from people farther and farther away from the city who will never benefit from the city services.”

Schofield said his bill would apply to Houston by referring to it as the “releasing municipality, defined as a municipality with a population of 1.8 million or more.” This means if passed, Schofield’s bill could affect up to 2 million people within Houston’s far-reaching ETJ.

“But that’s just in the bill,” Schofield said. “[Another state representative gets in the bill] and somebody could take that out and say, ‘This should apply to everybody [statewide].’”

Schofield said he is working on a second bill that challenges the current status quo of how far a city’s ETJ can extend. Current state law allows cities to extend its city limits 5 miles out at a time from its boundaries.

Schofield’s bill would challenge this by requiring cities to measure their limits from where they actually provide services, not from where the boundaries extend. Houston’s city limits extend down to the Barker Reservoir in Katy, but the closest area where services are provided is on the east side of Hwy. 6, Meyers said.

“At some point we have to say that the city is big enough,” Schofield said.

Schofield said he plans on speaking with Miller and Meyers to discuss combining bills.

“Sometimes it’s good to have two versions of similar bills so that if one doesn’t get up the hill the other one can, other times it’s better to just have one bullet, and we will work that out and see what is best for the property owners of Texas,” he said.