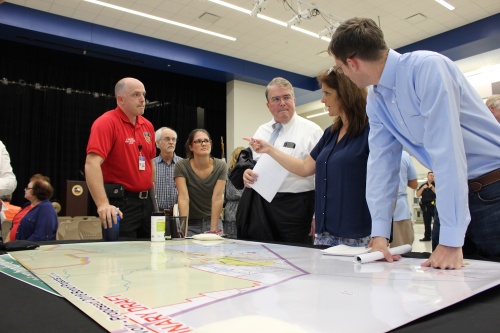 The proposed projects for the Barker Reservoir watershed include funding for a feasibility study required by Congress and the U.S. Army Corps of Engineers for any modification to the Addicks and Barker reservoirs, as well as funding for silt removal inside the Barker Reservoir and de-silting of the 17 channels and tributaries upstream of the reservoir, according to HCFCD documents.

Two more projects include plans for nearly $2.2 million in storm repairs in the reservoir and various subdivision drainage improvements that total $33 million. The storm repairs are already under design and will eventually be funded through a grant from the Natural Resources Conservation Service, a branch under the U.S. Department of Agriculture, HCFCD officials said.

“The flood control district decided to move ahead with design on our own dime to speed up the process,” HCFCD Chief Operations Officer Matthew Zeve said.

Zeve said the NRCS grant will fund 80 percent of the construction for the storm repairs and 20 percent will be funded by the flood control district. The first batch of repairs will go to construction later this year, he said.

The $33 million in subdivision repairs all reside within areas of incorporated Harris County that are run by municipal utility districts. Zeve said these subdivision repair projects will require partnerships with the local MUDs, Harris County Engineering and the flood control district to provide internal drainage improvements that include improving storm sewers and inlets.

“All these subdivisions were built before current standards were in place so this program is to fund, with the corporation of the MUD … [the storm repairs within those subdivisions],” Zeve said.

Harris County Judge Ed Emmett and spoke at the beginning portion of the meeting to thank residents for their participation. He said he thinks the most critical projects to the Katy area are cleaning up both the Addicks and Barker reservoirs.

“If the bond failed it would send a signal to the whole world that we don’t care,” Emmett said. “This is the most important election we’ve had in our area in a long, long time. Flood control is now the priority, it’s not job one, we are going to have to focus on it.”

Katy resident Susan Canavespe was one of the hundreds of Katy residents in attendance. She said while she is in support of the bond, she thinks more needs to be done and faster.

“There are a lot of people still doing construction that cannot live in their homes,” Canavespe said. “We need to get started, because this is not a 100-year event.”