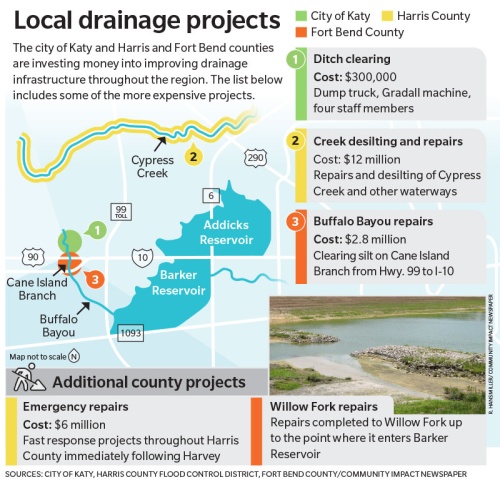 CLARIFICATION: Byron Hebert is the City Administrator for Katy.
Hurricane season began June 1 and extends through November, according to the Texas Department of Insurance. After flooding throughout the Katy area in 2016 and 2017, Katy-area drainage infrastructure still needs expensive repairs, area officials said.

Mark Vogler, chief engineer and general manager of the Fort Bend County Drainage District, said the county has made progress on repairs. Most of the drainage infrastructure in the county that was damaged or blocked during flooding related to Hurricane Harvey has been cleared or restored, he said.

Vogler said the county is focused on keeping the burden off taxpayers by finding outside money through grants to improve and repair drainage.

“Everybody’s putting tremendous effort into getting grant funding and other funding sources for the county,” Vogler said.

Vogler said his staff is working with the Army Corps of Engineers to coordinate desilting tributaries in Barker Reservoir, located at the southwest corner of I-10 and Hwy. 6, but there have been delays due to regulatory disagreements, he said.

“At the end of the day we’ll get a permit,” Meyers said. “We’re trying to get them to let us take action on our own, and they are taking the position that we need a permit.”

Harris County spent $6 million immediately after Harvey on emergency repairs; the federal government will reimburse those costs, she said. HCFCD is also working on 15 new repair projects across the county, she said.

“These projects are in design,” Hastings said. “After design comes the construction bidding process and then construction.”

The city of Katy is working to repair and improve drainage as well, according to Mayor Chuck Brawner.

Brawner said he has been in regular contact with federal, state and county politicians to ensure issues with drainage are taken care of. Points of contact include U.S. Rep. Mike McCaul, R-Texas, state Rep. Mike Schofield, R-Katy, commissioners and judges from Fort Bend and Harris counties, and representatives of local drainage districts.

Brawner said the city has done what it can in its own jurisdiction. A new Gradall machine—a special plow to clean out ditches—and other equipment was purchased after Harvey, and four new staff members were hired to improve the city’s ability to maintain drainage ditches. The new staff and equipment cost the city about $300,000, he said.

Brawner said it is important to note voters approved a $19.5 million bond package on May 5 for flood mitigation.

Katy City Administrator Byron Hebert said the bonds are being sold, and sales should be finished this fall. Afterward a series of drainage projects  will be undertaken in old Katy.

Brawner said the city is the first Houston-area community he knows to have passed a bond referendum in response to Harvey. Harris County Commissioners voted June 12 to hold a $2.5 billion bond election Aug. 25 for flood mitigation projects.

Brawner and Hebert said they understand residents’ concerns that some infrastructure had not been well maintained under prior administrations. They said hiring the staff and obtaining new equipment will prevent backlogs moving forward.

It is the federal government’s responsibility to progress with plans for a third reservoir in Waller or Harris County, according to Brawner. He said the Corps delayed the process by insisting upon a study to evaluate the environmental affects of a third reservoir.

Plans for the third reservoir are being pushed for by McCaul, who said the Corps is following procedure to ensure they do not do more harm than good.

“We’re submitting ... other studies to the Army Corps in the hopes that they can get their study done more quickly and expeditiously in light of the threat that we face,” McCaul said.
SHARE THIS STORY