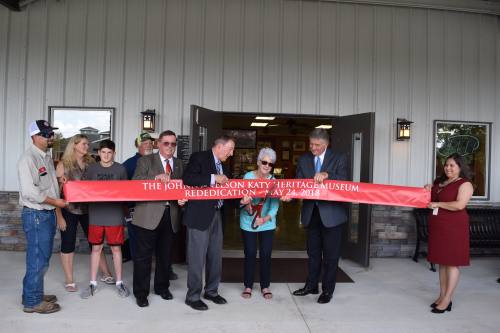 Paulette Nelson cuts the ribbon officially opening the Johnny Nelson Katy Heritage Museum which was named in honor of her husband who helped found it.

Katy Mayor Chuck Brawner and two former mayors, Doyle Callender and Hank Schmidt, provided comments at the dedication ceremony. All three spoke of Nelson’s service to Katy and provided anecdotes about his life and service to the city.

Callender spoke of Nelson’s habit of chewing on a cigar and thinking on projects like the Katy Heritage Museum, which Callender said Nelson felt was important to preserve the history of the city.

Callender recalled speaking to Nelson about the museum and how Nelson had chomped on his cigar emphatically about the idea of creating the museum years ago. Callender said he would never forget that day because it was Sept. 11, 2001.

“Johnny had a flaming, flaming desire to make this happen. We traveled many miles, made lots of deals and most of you donated to this museum,” Callender said. “So it wasn’t bought or purchased. It was all brought in.”

Since 2001, the museum has grown to include several tractors, antique cars and a collection of historical artifacts reflecting the city’s history and rice farming heritage, Brawner said.

It was during his time as city administrator that Nelson began working to help create the museum, which is located at 6002 George Bush Drive in Katy.

Nelson’s wife, Paulette, was on-hand as well and cut the ribbon to officially reopen the museum. The museum had been closed for renovations and had nearly reopened when Hurricane Harvey brought floodwaters to Katy. Damage from Harvey-related flooding was repaired, and members of the Katy City Council approved the renaming of the museum in February.

“Johnny loved Katy and he loved all of you, and this is a great time to celebrate,” Paulette said.

Each of the speakers said the history of Katy would be preserved by the museum and that it was a fitting tribute to Nelson.

“We may not hear all the ducks and geese coming by in the fall anymore, but you know, with this museum and Johnny’s support, it’s very befitting to make this [dedication] happen. It’s very fitting because we’ll never forget where we came from and what we are standing right here today,” Callender said.