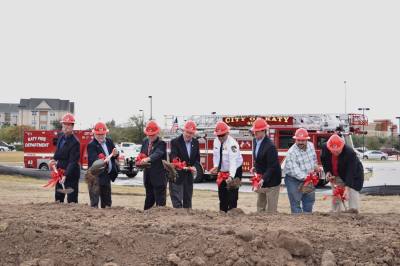 Construction has begun for the Katy's second fire station to better serve the city's southern portion.

The station will also back up other nearby fire departments with which the city has cooperation agreements, he said.

"We started on this project several years ago [and] it's now time to see it come to fruition as we work through this for the next few months," Katy's mayor, Chuck Brawner said. "It's very important to me and I know it's important to our firefighters that are here today."

During his speech, Wilson thanked current and former city officials, staff and assistant chiefs Dana Massey and Kenny Parker for their efforts. The city received a $2.2 million Staffing for Adequate Fire and Emergency Response, or SAFER, grant from the Federal Emergency Management Agency in August.

The grant will help pay for construction and staffing at the station, which is expected to be operational in late 2018.

"This station will go to help serve the many citizens in and around - and not just citizens, [but also] visitors to the city of Katy. This is a huge step, this is a historic step," Wilson said.