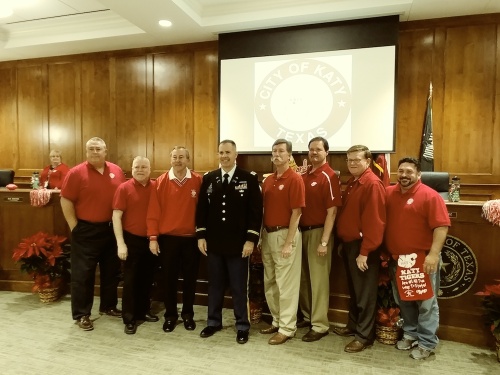 The Katy City Council met Monday evening for its last scheduled meeting of 2017. The agenda for the night included the presentation of an Above and Beyond award to Col. Scott M. MacLeod, commander of the 136 Maneuver Enhancement Brigade of the Texas National Guard, for its service during and after Tropical Storm Harvey. Other items included the approval of several community events, the appointment of board members, distribution of hotel occupancy tax proceeds, contract updates and an update to the city’s budget.

1- The council voted unanimously to approve moving forward with stormwater drainage improvement projects that are in development, including the Pine Forest subdivision project. The council will approve appropriate measures to reimburse the city for these expenditures out of anticipated 2018 bonds. Details on a bond election are not available yet, but the council anticipates proposing one or more bonds to fund drainage improvements in early 2018.

2- The council also awarded a total of $227,000 in hotel tax proceeds to be awarded to support the promotion of four events in Katy. The Champion Gymnastics Foundation, which will hold its 2018 RD761 Jr. International Team Cup and Men’s and Women’s Invitational events Jan. 15-18, received $60,000. Ainsley’s Angels hosts a half marathon in February and a kids triathlon in May;  each of those events received $25,000. The final event is Wild West Brewfest, set to take place May 4-5 at Katy Mills. The festival was granted $117,000 in hotel tax proceeds.

4- The council authorized a change order to the contract with Sprint Waste Services for hauling sludge and landfill refuse. The change will add $19,232 to the contract, bringing the total contract value to $105,912.

5- The city agreed to execute an agreement with the Katy Management District No. 1 to accept repayment of $318,790 for painting water towers throughout the city. The city has been paying for these improvements in anticipation of repayment by the district, City Manager Byron Hebert and City Finance Manager Becky Wilkins said.