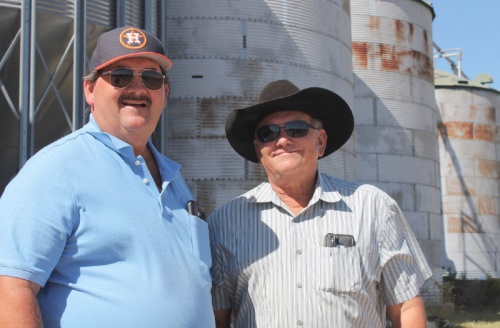 One perk of operating a rice farm on the Katy prairie is the wildlife that flock to the fields throughout the year. Ken Jasek, owner of Jasek Farms at 28400 FM 529, Katy, watched swarms of birds fly in and out of the area as he drove the perimeter of his 632 acres in late October.
“This is one of the best parts of my day,” he said.

Since 1999, Jasek and his older brother, Larry, have farmed rice in Katy. Heavy rains, including the nearly 4 feet of water dropped on his fields during Tropical Storm Harvey, cause miniature ponds to form around the crops.

“One hundred percent of the second crop is Hurricane Harvey water,” Ken said, referring to why he has not needed to use his groundwater pipes since late August. “I just don’t believe in wasting a precious resource.”

As a result, migrating flocks of ducks, geese and shorebirds land in the Jaseks’ fields, resembling something like Katy of the 1960s and 1970s when geese hunts were as big a commodity as rice. Beavers, nutria—a semiaquatic, beaverlike rodent—and wild hogs are also found on the farm.

The Katy prairie has always been hospitable to rice farming because of its soil and ability to hold water, Jasek said. The industry has largely faded in Katy, but Jasek hopes to keep his forward momentum by packaging some of the nearly 3 million pounds he and his three other staff harvest annually.

After seven years of planning and building a mill, Jasek sold his first batch of 2-pound bags of standard long grain rice a month ago.

He started at the farmers market in Cinco Ranch and then participated in the annual Katy Rice Harvest Festival in October, where he said he sold between 500 and 600 bags. Jasek Farms rice is free of additives and pesticides, and it sells for $3 a bag or $10 for four.

Jasek said he dreams of getting his rice into H-E-B, Randalls and Kroger but has to build up a customer base and improve his shipping method.

“I’m hopeful,” he said. “They will recognize quality.”

He and Larry were attracted to farming because of the outdoorsy factor and the idea of having a little bit of country living in proximity to the city. They began acquiring farm equipment to do jobs here and there until the idea came to run their own property.

“It seemed like it all just came into play,” Larry said.

But even if demand is high for his rice, Ken said encroaching development from houses, retail and other construction could cause him to sell. Land is a commodity in Katy right now, but another sticking point could be that new neighbors may object to the airplane Ken periodically flies across FM 529 to drop fertilizer over his delicate rice plants.

“This is something we’re going to have to deal with,” he said.