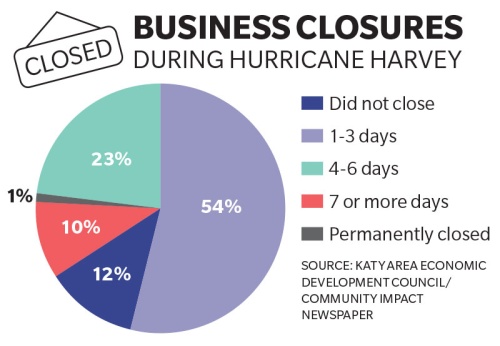 Many businesses closed as a result of Harvey-related flooding for differing lengths of time.

The Katy Area Economic Development Council's president, Lance LaCour said by email Friday that the organization has established tools to assist businesses that indicated on a recent survey that they were negatively affected by Tropical Storm Harvey.

KAEDC will be following up with 15 businesses who participated in the survey to discuss moving forward with recovery.

The council has partnered with local banks including Allegiance, Amegy, Integrity and Westbound, which will offer 180 day loans to businesses affected businesses at 4 percent annual percentage rate, or APR, through Dec. 31. The program is modeled after Galveston area banks' response to Hurricane Ike in 2008, according to KAEDC.

"Today it only makes sense to restart this program for Hurricane Harvey and we welcome other banks throughout our region to participate in implementing this program within their respective impacted areas," said Victor Pierson, president and CEO of Moody National Bank in Galveston.

Low interest loans are also available through the Small Business Administration. KAEDC's program is intended to be a stop-gap between the application for an SBA loan and SBA funds being distributed to applicants.

KAEDC is also working with the West Houston Association's Flood Drainage and Wetlands Committee to develop the Hurricane Harvey Response Plan to help mitigate future flooding. WHA is a think tank that works to guide the West Houston area through rapid growth.

Results from a KAEDC survey released Thursday indicate that Tropical Storm Harvey did not affect the majority of Katy area businesses. The survey results recorded 89 percent of businesses were closed for less than one week, and only 1 percent of those surveyed were permanently closed by the storm.

KAEDC began conducting the survey immediately after Harvey inundated the region in late August, causing widespread flooding. The purpose of the survey was to see what effects the storm had on local businesses.

“Moving forward, Katy Area EDC will be working closely with impacted business to do what we can do assist the recovery process,” KAEDC President Lance LaCour said.

Most of those businesses indicated that the primary reason for closing their doors during and immediately after Harvey was a lack of access the business, KAEDC said.

In total, businesses reported more than $656,000 in estimated damages, including destruction of buildings, inventory and office equipment. That damage was incurred by less than 30 percent of respondents, while more than 70 percent of business owners said their properties were unharmed, KAEDC said.

The full survey results can be found here.

This story will be updated as more information becomes available.
SHARE THIS STORY