Need flood insurance? What to know about managing your risk The widespread damage caused by Tropical Storm Harvey has Katy-area residents questioning whether they need flood insurance. Knowing if a property is in a flood plain and what type of coverage is available is crucial to understand prior to contacting an insurance agent.

Greater Katy has seen flooding four of the last five years, the last three events being the Tax Day Floods of April 2016 as well as rain events on May 26 of both 2014 and 2015.

“Normally, the land acts to absorb a certain amount of precipitation and release excess water slowly into streams,” Bira said.

As a result, the land changes faster than data is updated, making many flood zone maps out of date, Bira said. This can make it difficult to know if a specific property is vulnerable.

FEMA updates flood maps as often as budgets allow, prioritizing those areas most prone to flooding, Herrera said. The maps show what is referred to as the 100-year flood plain, meaning that there is a 1 percent chance of flooding each year.

“During a 30-year mortgage, you’ve got a 26 percent chance of getting flooded at least one time [in a 100-year flood plain],” Herrera said.

Flood damage costs Americans $8.2 billion each year on average and just 1 inch of water inside a building can cause about $27,000 in damage, according to FEMA.

Private companies had walked away from flood insurance due to the underwriting and risk assessment challenges, Barry said. As it stands, the program is in debt.

Homeowners who have not experienced flooding recently are reluctant to purchase what they consider an unnecessary measure of protection, leading to a smaller risk pool than is necessary to keep the program solvent, Herrera said.

“FEMA’s NFIP owes the U.S. Treasury nearly $25 billion, primarily because of monies the NFIP had to borrow to meet its financial obligations to NFIP policyholders after 2005’s [Hurricanes] Katrina and 2012’s Sandy,” Barry said.

Congress is debating whether to continue the NFIP, which is set to expire Sept. 30, Barry said. Prices must be set to match flood risks and give the program a way to repay debt.
“Everybody’s subject to flooding. It just is at different risk levels,” Herrera said. “Buy flood insurance whether it’s through the federal government or through the private markets.”
SHARE THIS STORY

"Over the last couple of weeks, there has been a bit of a rush just to make sure that we are able to successfully transition all of those classes to an online setting," one local university representative said.

The campus will be located near the intersection of Wallis Street and FM 359.

"The Ebola scare a few years ago was a useful trial run for us to handle these types of infectious disease events," a local hospital representative said. 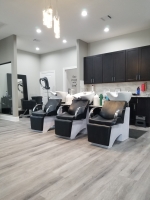 It is now located on Red River Drive.