Show map
After much anticipation, Willow Fork Park, at Grand Parkway and Cinco Ranch Boulevard, opened to the public Sunday. As rain fell during the ribbon-cutting ceremony, Willow Fork Drainage District Board President Richard Ward laughed and said the weather was typical for how it had been during the project.

The park was expected to open in July but construction was delayed after the area’s historic flooding on April 18, he said. “We had hoped to open the park a little earlier but got behind because of the drought and the heavy rains.”

He said WFDD is planning a grand opening for the spring of 2017 but wanted area families to begin enjoying the park now. Ward said Willow Fork Park differs from the drainage district's other parks, Central Green at La Centerra and Exploration Park at 15020 Cinco Park Drive, because it is more of a "passive use" park for families to picnic, fish, kayak or paddle board.

He said it will be open from dawn to dusk and will not accept facility reservations at least for the first year.

Despite the inclement weather during its construction, the park's design turned out even better than expected, said Susan Cita, senior associate at TBG Partners, the park’s architectural firm.

Cita said Centerpoint Energy is expected sometime later this week to turn on the power needed for the restroom lights, security lights and cameras.

The rest of the park, however, she said is self-sufficient and environmentally conscious. Solar lights line the walkways and Louisiana Iris was planted along the water’s edge to improve water quality. The park’s design also features native plants such as Live Oaks, Bald Cypress and Lantana.

“We are trying to re-establish the Katy prairie,” she said. “The park already has seen wildlife such as ducks and blue heron.”

Katy ISD Superintendent Lance Hindt said, “Our science teachers are dying to get their classes out here.”

KISD owns the land and signed a 50-year lease with WFDD to build and operate the park. Hindt thanked the WFDD board and said the district also plans to use the park for track practices and meets.

“You’ve heard the saying, ‘It takes a village,’ and this really is a village,” he said.
SHARE THIS STORY 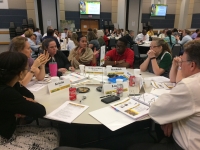