Controversial YA novel restored to some Katy ISD school libraries 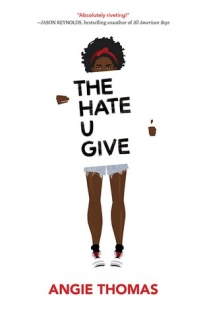 The book that briefly made Katy ISD an infamous household name late last year has been restored to some district campuses.

"The Hate U Give," by Angie Thomas, was removed from KISD libraries in November after a parent of a junior high school student complained to the board of trustees about the book's age appropriateness. As of Jan. 11, it is available in KISD high school libraries, district officials said Monday.

The novel received numerous literary accolades when it debuted last year and deals with subjects such as the modern African-American experience, drugs, class, police brutality, the Black Lives Matter movement, and teenage development.

Superintendent Lance Hindt approved its removal from district schools two months ago because he considered it to have "pervasive vulgarity and racially insensitive language."

The novel then went before a review committee but was not banned from school property entirely, KISD spokesperson Maria DiPetta said. Nevertheless, the move was enough to spark a media firestorm and even drew a critical response from Thomas herself.

I'm saddened to hear that a school district in Texas banned #TheHateUGive, but I'm also empowered - you're basically telling the kids of the Garden Heights of the world that their stories shouldn't be told. Well, I'm going to tell them even louder. Thanks for igniting the fire.

On Monday, Hindt defended his decision and repeated his past statement that the removal was based purely on the amount of profanity in the book.

He said he had read the book and thought it was good, and that the subject matter was relevant to teens today. Hindt also said he expected to see the novel's movie adaptation, which is in production.

"I love the story, too. I read it, I read it twice," he said. "But I do, fundamentally as superintendent of schools, disagree that we can put that type of language—profanity—in the hands of a minor student without some type of informed parental consent."

Among the three people who addressed the board about the issue was Ny'Shira Lundy, a 15-year-old from the Katy area, who started a petition addressed to Hindt and KISD to reinstate the book. Lundy thanked trustees and the superintendent for their decision to put the book in high school libraries, and described why she hoped other students would enjoy the novel as much as she did.


"Like [the heroine] Starr, I'm a black female who attended a predominantly white prep school. I struggled to feel as if I could be myself," she said on what was also Martin Luther King Jr. Day. "After reading her story, and seeing how she went from feeling like to she had to adjust to the environment that she was in, to feeling as if she had a voice and that she should be bold enough to share it, it made me feel confident, and as if I shouldn't be afraid to embrace who I am."

1/2 Tonight, Katy area teen @Nyshira_Lundy who started a petition to get @katyisd to put #TheHateUGive back on school shelves, thanked the board and @KatyISDSupt directly for putting the book back on high school library shelves. pic.twitter.com/Lzqmz7Qk68

DiPetta said that the book is still not back in middle schools pending further review. It was never included in elementary school libraries as it was deemed above that grade reading level, she said.

Meanwhile, KISD will be presented with changes to its EF Local policy at the regular board agenda meeting next week. The policy describes how KISD should choose instructional materials for students and in particular, how to choose materials that cover potentially controversial topics or display a diverse range of backgrounds and ideas.

It also describes how any district parent, employee, or resident can formally challenge instructional materials "on the basis of appropriateness," according to the policy text. Hindt said the local policy needed to be more standardized when applied to individual schools.

"We had a process in place that would allow for a campus to make a determination on an instructional resource that would be challenged, that would affect only that campus," Hindt said. "And then another campus could make a decision that was opposite of that, which would provide inconsistencies districtwide."