With board of trustees' fate in question, business leaders urged to step up support for Houston ISD 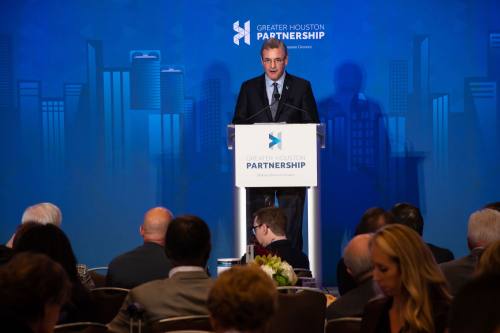 Following a keynote address by Texas Education Agency Commissioner Mike Morath in which he called for broad community engagement in public schools, Greater Houston Partnership President Bob Harvey told area business and school leaders he expects the replacement of Houston ISD's board in the coming months and asked them to get involved and advocate for a new direction for the district.

"HISD needs a fresh start," Harvey said during closing remarks at the partnership's first-ever State of Education summit. "That's why we've called on Commissioner Morath to appoint a local board of managers to run the district that is composed of a diverse group of Houstonians who will prioritize our children and create sustainable conditions where clear-minded decisions can be made."

On Sept. 5, the board of trustees asked the district to formally appeal the rating of Wheatley High School—one of two potential triggers that could lead the school board to be removed. An appeal decision could come as late as December, when the TEA will formally finalize its accountability ratings.

The other potential trigger is the state investigation into five board members that recommended their removal, citing evidence of violations of the Open Meetings Act and interference in district contracting. The board members involved in the investigation have filed a lawsuit to appeal those findings.

Harvey also pledged that the GHP, a regional chamber of commerce for 11 counties and over 1,000 organizations in the Houston area, would remain engaged in the district for the long haul even though prior attempts to do so, Harvey said, were "episodic."

Part of that means participating in the upcoming board of trustees election, he said, because whoever is elected could be seated before a state intervention occurs and could remain elected after the managers' appointments end. That could be as short as two years, if failing schools improve their ratings.

"This is an opportunity to reset the culture of governance. ... It also requires a plan for a thoughtful transition that returns control back to the electorate," Harvey said.

The partnership's comments came after a keynote address by Morath, who touted the role that House Bill 3, the comprehensive school finance bill that passed this summer, will have on improving student outcomes across the state.

"We are much better than we have ever been before, but we're still not good enough for all of our kids," Morath said.

Morath also called on business and community leaders to volunteer their time and talents to help public schools thrive.