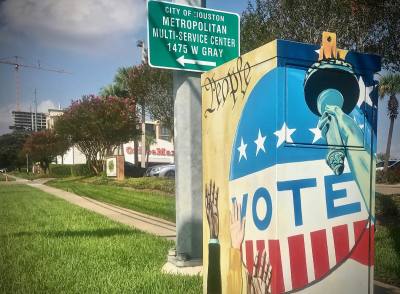 The mayor, city controller and all 16 city council seats are up for election as well as the HISD board of trustees, several proposed state constitutional amendments and a $3.5 billion bond measure from the Metropolitan Transit Authority of Harris County.

The last such election, in 2015, recorded 20% voter turnout, but election officials are anticipating 35% to 38% turnout this year, Winn said.

In the past five mayoral-year elections, voter turnout fell as low as 9 percent and did not surpass 21 percent, Harris County election records show.

"You can definitely expect to see that trickle down," Stein said.

Term limits for the mayor, city council and city controller were redefined in 2015 from three, two-year terms to two, four-year terms.

As a result, this is the first time Houston candidates have had to wait four years to run for office. Having less frequent opportunities may have prompted this year’s large, 125-plus candidate pool, Stein said.

“Candidates used to wait until a seat opened up, but with four-year terms, people don’t want to wait,” he said.

The longer terms might also be driving more contested races for incumbents who now have to defend a longer voting record and uphold their name recognition.

“In four-year terms, people forget you. The best advertising you can get is people going into the polling booth and seeing the same name every two years,” Stein said.

Roughly 5 to 10% of the anticipated boost in turnout might come from an easier voting process, Winn said. This is the first municipal election that voters can vote at any polling location in the county rather than a specific precinct.

Individual polling locations will not see a greater number of election administrators, however the county is training them in new procedures aimed at increasing efficiency and preventing long wait times, Winn said.

With a lot on the line this school year, Houston ISD has worked to reconnect with students and fill teacher vacancies.

A number of events are taking place this holiday season throughout the Bellaire, Meyerland, West University and surrounding areas, including lights displays, concerts and holiday festivals.

Hanukkah in Meyerland: Check out how one local Jewish community center commemorates this annual holiday

Check out this story about Hanukkah and its celebration in Houston's Meyerland area.