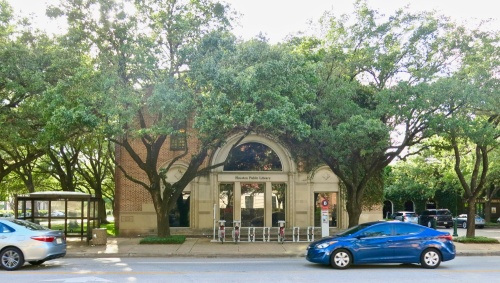 The Freed-Montrose Library, 4100 Montrose Blvd., could be moving if the city ends up selling the building to St. Thomas University.

City officials are holding a town hall this week to gather input on the possible move of the Freed-Montrose Neighborhood Library.

The new location could be within a proposed mixed-use development near the 800 block of Westheimer Road—the future site of the Montrose Collective, a new project by Radom Capital, the same developer behind Heights Mercantile and other area projects. The site is currently occupied by a strip center that houses a Greek restaurant and a Houston Police Department storefront, both of which would have to be shuttered or relocated once the project gets underway.

Houston Mayor Pro Tem and District C representative Ellen Cohen will host a public meeting about the project from 6-7:30 p.m., Sept. 26 at the Scanlan Room of the Jerabeck Athletic Center at the University of St. Thomas.

The Freed-Montrose Library's current location, a former church building from the 1940s at 4100 Montrose Blvd., may potentially be sold to the University of St. Thomas, a District C spokesperson said.

If the library does relocate into the new development, it will not do so until construction is completed, officials said.

The Montrose TIRZ has been asked to consider contributing funds for a parking garage at the new development to mitigate parking availability concerns, although that decision is not yet finalized, Montrose TIRZ administrator Damon Williams said.

More details will be shared at the Sept. 26 meeting, which will include presentations from Cohen, the Mayor's Deputy Chief of Staff James Koski, Houston District Police Chief Troy Finner, Montrose TIRZ representative Sherry Weesner and a representative of Radom Capital.
SHARE THIS STORY