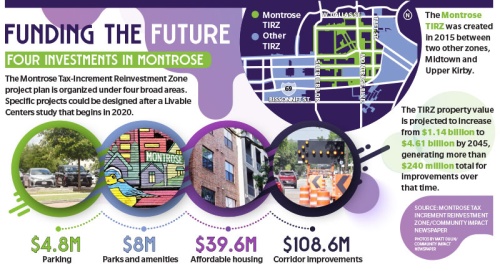 With the Montrose Management District still involved in litigation with business owners, the area’s other economic development engine, a tax increment reinvestment zone, or TIRZ, is treading carefully as it begins to envision big-picture infrastructure improvements.

“We are being very deliberate, and we’re going overboard with transparency and openness,” TIRZ Chairperson Randy Mitchmore said. “But we also need to get something going soon and have an immediate impact.”

In January 2020, the area is slated to begin a nine-month long Livable Centers Study, which gives long-range guidance on mobility projects, economic development and other improvements, according to the Houston-Galveston Area Council, which oversees the studies. The TIRZ board of directors can use the study to guide funding decisions and support grant applications.

A TIRZ, which generates revenue only when the entire zone’s property value increases from its base year, helps direct resources to specific areas of the city that might not otherwise get the infrastructure it needs, said Council Member Ellen Cohen.

“We have a revenue cap, and that precludes getting the kind of money we need,” said Cohen, whose district includes the Montrose area.

Revenue collected by the TIRZ is exempt from the city’s property tax cap. The Montrose TIRZ began in 2015 with a value of just over $1 billion. In 2018, its value was over $1.5 billion, so the TIRZ collected a portion of property taxes on the $500 million in growth that year, or about $2.5 million.

The TIRZ has an approved budget of $167 million, according to city records. Its project plan is set up in four large categories—corridor improvements; workforce/affordable housing; parking enhancements; and parks, recreation and cultural amenities—and while no firm plans are in place, he said, there are some ideas the board is considering.

On affordable housing for example, members have discussed using $39.6 million toward direct subsidies that could allow someone to rent in Montrose.

“Unlike other TIRZ, we want those affordable housing dollars spent here, not going to the city to be distributed elsewhere,” Mitchmore said.

The TIRZ board has hired an engineer to help organize project plans and is securing a financial adviser to refine its revenue projections, review borrowing options and the budget plan. Of its $167 million budget, about $6 million, or 3.5%, is set aside for consulting and oversight.

Even with signs of progress, residents need to temper their expectations of what the TIRZ will do and when, Cohen said.

“The best way to look at it is that the TIRZ is infrastructure—roads, drainage and water lines—things you cannot see but have the greatest impact to promote growth,” Cohen said. “But everyone must be patient. It takes a while to accumulate the funds.”

The TIRZ must also have political support, as every decision it makes is vetted by City Council.

Unlike a TIRZ, a management district can invest in maintenance, amenities, branding and visual enhancements that give an area broader appeal, said David Hawes, senior partner of Hawes, Hill and Associates, a firm that consults with management districts, TIRZs and other entities.

While cities and counties can establish a TIRZ, management districts are created by the state Legislature, which authorizes the district to assess a tax on businesses. Working in coordination with a TIRZ, however, the two entities can accelerate property values and development. The Upper Kirby Redevelopment Authority, for example, which has a management district and a TIRZ, grew from around $684 million in value in 1999 to over $3.2 billion in 2018.

After it lost a district court case over its creation in 2017 and under backlash from business owners, the Montrose Management District went quiet, winding down its operations a year ago.

“It was collecting this tax revenue without much to show for it,” said Mark Davis, owner of the Montrose-based brokerage Davis Commercial. He was not involved in the lawsuit, but as a business owner he said he was in the dark when it came to what the entity was trying to accomplish. “All I got was a bill in the mail.”

Mitchmore wants to make rapid progress on a few small-scale, high-impact projects, such as sidewalks, to show residents they are putting tax dollars to work.

“They’ll start throwing stones if we don’t get something done,” he said.

Progress with the TIRZ and the potential of the management district’s revival has Mitchmore optimistic about Montrose’s future.

“I see Montrose Boulevard as our crown jewel. It really is a connector, from Buffalo Bayou all the way to the Medical Center, and if we can get it right, it can really enhance the area even more,” he said. “Development follows roads.”

Major private developments are already in progress or have recently completed, including the Hanover high-rise and the adjacent La Colombe d’Or Hotel & Residences, which is adding a 34-story, 265-unit luxury high-rise. On top of that, the Montrose-Museum District-Midtown market has 2,000 units of multifamily under construction and another 4,000 proposed, according to an ApartmentData.com report.

“If the management district comes back, it needs to do things we can actually see. A simple security patrol would be a start … but also look at the sidewalks, the intersections. You don’t need a study to know it needs help,” he said.
SHARE THIS STORY