The proposed budget closes a $179 million deficit that included a $79 million obligation to fund pay raises for Houston firefighters as mandated by voter-approved Proposition B, which requires the city to pay firefighters the same amount as police officers of commensurate rank.

“In the absence of Proposition B, the way we have been budgeting this budget, we would have balanced it without any layoffs at all,” Turner said.

The city’s general fund, which covers most but not all public safety personnel costs, increased to $2.5 billion, or 2.2% higher than fiscal year 2018-19, according to budget documents.

Factoring in layoffs for 67 fire cadets, 47 municipal workers, 220 firefighters as well as the elimination of 67 vacant city positions represents about $36 million in savings, Turner said.

The budget's approval process begins May 8 with public budget workshops between department heads and City Council members as well as a public hearing and City Council vote June 5.
SHARE THIS STORY 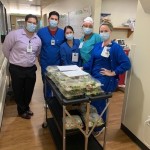