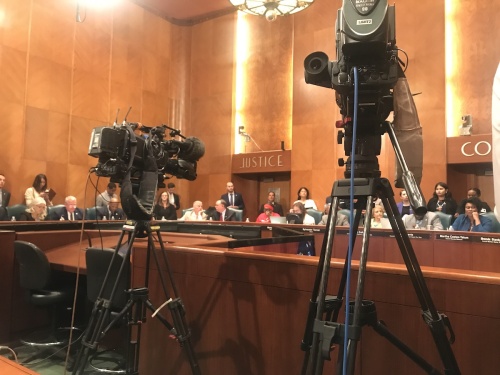 In a 10-6 vote that followed three hours of often-heated discussion, council members approved the layoffs, which Mayor Sylvester Turner said will be sent out by May 1.

For two days leading up to the vote, Turner and Marty Lancton, the president of the Houston Professional Firefighters Association, sat down to court-ordered mediation to try to agree on a phase-in plan for pay raises for all Houston firefighters that would spread the cost out over time. Both days of mediation ended unsuccessfully, and another is ordered for April 29.

“I think this is among the toughest votes this council or any council has faced in the city of Houston,” said At-Large Council Member David Robinson, who voted in favor of the layoffs.

In the absence of a phase-in agreement, Houston City Council voted on whether to approve the layoffs in an attempt to fund the raises in full before the end of fiscal year 2019 on June 31.

The cost of implementing voter-approved Proposition B, which mandates pay parity between Houston police officers and firefighters, was originally estimated at $100 million by the city’s finance department. Latest estimates from the finance department total $79 million for FY 2020.

To pass a balanced budget at the end of the budget cycle, Turner said layoffs were inevitable if the full pay raises are included. If firefighters were not laid off, which requires city approval, Turner said the administration would issue layoffs for 220 or more municipal workers.

"If you vote not to proceed, you are in a sense instructing this administration in sending additional lay-off notices to additional municipal employees in order to secure the $20 million that we would have received from this item," Turner said.

Knox proposed the possibility of referring the decision back to mayor's office while awaiting the outcome of mediation and said a vote either way would act as a negotiating tool for the mayor.

District I Council Member Robert Gallagos, who voted in approval of the layoffs, said the city should not risk losing more municipal employees while awaiting the outcome of mediation and a pending court case surrounding Proposition B.

"At the end of the day, Prop. B was the fire union's proposal, we do have to face economic reality and pass a balanced budget, and I cannot support laying off more innocent municipal employees and getting the short end of stick on Prop. B,” Gallagos said.

In a written response, the Houston Professional Firefighters Association condemned the vote.

"[Turner's] failed leadership and relentless political and legal attacks on firefighter families will now put the communities we serve at risk," the letter stated.

Turner already issued layoffs for 67 fire academy cadets and 47 for municipal workers across multiple several departments in mid-April because the positions are not considered “classified” and do not require City Council approval. The layoffs serve as 60-day notices and are not official until the 60-day mark is reached, Houston Communications Director Alan Bernstein said.