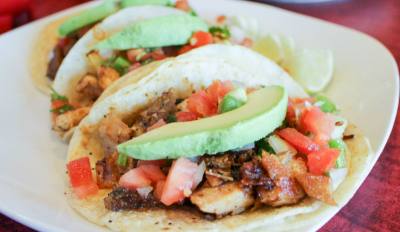 La Cocinau2019s street tacos come with chopped beef or chicken fajita meat with onions in a corn tortilla. The tacos are topped with fresh pico de gallo, avocado and lime.

Andres Novoa said his Mexican restaurant La Cocina off FM 359 in Richmond was one of the first businesses to come to the Pecan Grove area when he opened it in October 2000.

Nearly 20 years later, La Cocina has become known in the Fort Bend and Richmond communities as the neighborhood place to go to for fresh, authentic Mexican food and serious margaritas.

“We [were] pioneers; [before], there was nothing around here,” Novoa said.

Novoa said he started in the restaurant industry working for “Mama” Maria Ninfa Rodriguez Laurenzo, in the Ninfa’s restaurants. He took a job working as a busboy at a Ninfa’s location in Dallas and worked his way through every position until he was named general manager over a period of 20 years.

“I knew everything about the business—the nuts and bolts,” Novoa said.

Novoa said he knew his next step was to open his own restaurant, a dream he always had. It was at the Ninfa’s store at Hwy. 59 and Bissonnet Street where he met a loyal customer who became his friend and business partner who provided Novoa with a loan to open his first restaurant in Rosenberg. Novoa honored him with his own dish, Sam’s Mixed Grill.

“He was my angel … he was a regular customer that believed in me, believed in how I took care of him,” Novoa said.

Novoa said he was able to return the loan to his friend who has since passed away. Four years after opening the restaurant, he decided to close the Rosenberg location and move La Cocina to Pecan Grove.

“To me, this was the best market, the best people,” Novoa said. “I like the community here.”

Passion to give back
Over the last 12 years, Novoa has organized a community fundraiser event, a Cinco de Mayo Bash, for which he invites attendees to enjoy food, live entertainment, and silent and live auctions to raise money for the Fort Bend Senior Meals on Wheels nonprofit organization.

Since starting the fundraising event, Novoa said his restaurant has raised over $350,000 for the charity. Last year, it raised $60,000 and has consistently surpassed the previous year’s amount with each successive event.

“And it’s not only helping with money. What it also does is creates awareness in the community, it creates a volunteerism [for people] to help and drive and do whatever they can for our seniors,” Novoa said.

Novoa said he thinks he may have been influenced by Lorenzo, a known advocate of local philanthropic efforts, after working for her for 20 years.

“She was always helping in the community,” Novoa said. “I guess it rubbed off on me.”

While Novoa said business has been steady, he admits running a restaurant is still demanding, especially with hurdles like the increasing number of Mexican restaurants coming to the area that bring competition, or the Hwy. 90A and FM 359 road construction project that has made access to his restaurant more complicated for customers.

“The construction has affected us in a way, our lunches, of course, so that’s [why] we are coming [up] with specials–a special every day with food and drink,” Novoa said. “You have to get on your game, up your game.”

In an effort to become more competitive, Novoa said La Cocina has increased the size of its margaritas but kept the price the same. It also offers lunch and happy hour specials every day.

Novoa said despite the challenges, he is grateful for the Richmond and Fort Bend community for welcoming him to the area nearly 18 years ago and for the loyal customers who keep coming back.

“We know the people by name over here,” Novoa said. “We are blessed that we have a base of followers that believe in us. This is a good community.”
SHARE THIS STORY

Although students in Cy-Fair ISD will no longer have the option to learn remotely, Google Chromebooks distributed last year will be incorporated into the classroom experience this school year.

Learn about the Tanabata Japanese Star Festival, see live performances at Miller Outdoor Theatre: 6 things to do in Bellaire, Meyerland and West University in August

There are plenty of things to do in the Bellaire, Meyerland and West University area in August. Community members can celebrate George Hermann's birthday or get gardening tips from Jean Fefer.

The importance of accessible parks and green spaces for recreational usage has increased since the COVID-19 pandemic, according to a new study by the University of Houston-Clear Lake.

Tomball Night returns for its 49th annual event; teachers can save money at Deacon Baldy's; and check out four other events this weekend.

Children of The Woodlands celebrates 40 years

The preschool was started by The Woodlands Methodist Church in 1981.