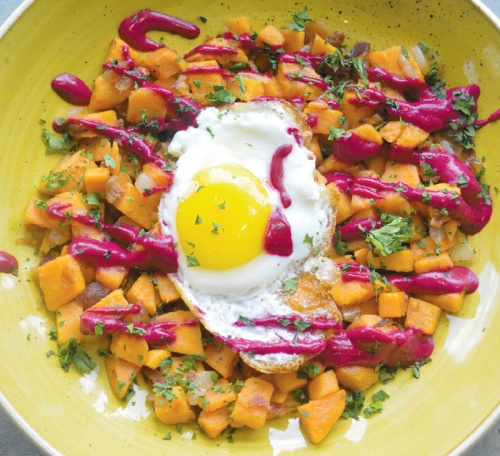 Egg and hash ($15) The dish is a brunch menu item made with sweet potato hash and a fried egg, drizzled with a homemade beet vinaigrette.

In pursuit of her passion for cooking, which sprouted at a young age, Executive Chef and owner Hilda Ysusi opened Broken Barrel in Hughes Landing in early February.

The international tapas concept features a variety of Mediterranean-, Latin- and Asian-infused dishes for brunch, lunch and dinner. The eatery also offers a full-service bar with more than 100 labels of wine, and it specializes in gin-infused cocktails.

“I really like taking care of people and seeing them enjoy the food that we prepare,” Ysusi said. “I’m very lucky that we’ve built a team of people who really care about their jobs and who are happy when the guests are satisfied—that’s our goal.”

Originally from Mexico City, Ysusi was inspired to become a chef after watching her father cook while she was growing up. As a teenager, she studied in a Le Cordon Bleu-sanctioned pastry program in Sweden.

From there, Ysusi continued her education by attending the Culinary Institute of America in Hyde Park, New York, from which she earned degrees in baking and pastry arts in 2010 and in culinary arts in 2012.

The restaurant changes its menu seasonally and offers specialty items every Friday and Saturday. The eatery also boasts a different daily house-made popcorn flavor and launched its fall-inspired menu in October.

“I think that because we’re family-owned, that allows us to have the flexibility to change our menu and wine list as often as we want,” Ysusi said. “Most of our specials are items we offer because guests have asked for them, so we’re very flexible.”

Broken Barrel can host parties of eight guests and more during private events, which fill up the entire restaurant. Catering services are also available.

Ysusi plans to introduce The Pink Drink to the menu in October, from which all proceeds will benefit a breast cancer foundation. She said she plans to do a similar promotion in November for a men’s health initiative.

“I want to continue growing our lunch and brunch services,” Ysusi said. “I want people to know that they can come here during their lunch break for an affordable, quick lunch with good service. I don’t want people to steer away from us just because it’s a nicer restaurant, because our prices are very competitive.”