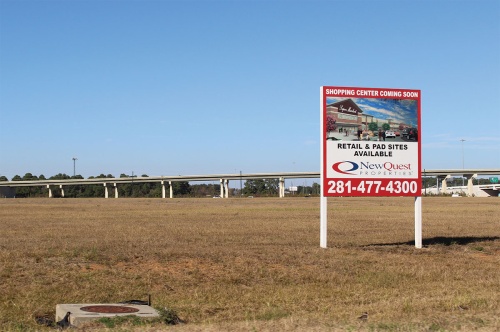 NewQuest Properties is developing property at the southwest corner of Hwy. 249 and the Grand Parkway in Tomball.

NewQuest Properties is re-evaluating its use of the site for the proposed Grand Parkway Town Center shopping center in Tomball, potentially revising the site to combine retail, office and medical space as a mixed-use development, Vice President Austin Alvis said. He said NewQuest is re-evaluating the proposed shopping center because of a slowdown in the grocery market—including Kroger and Sam's Club, previously slated to be anchor tenants for the Grand Parkway Town Center.

"We’ve had to drawback and reassess what’s the right use for the site," Alvis said. “Given changes in the retail environment, NewQuest [is] now considering mixed-use development on the site to include retail as well as office and medical uses.”

The Grand Parkway Town Center is slated for 63 acres at the southwest corner of the Grand Parkway and Hwy. 249 within Tomball city limits, Community Impact Newspaper previously reported.

"[We're] kind of waiting for the large retail anchors to come back around as well as kind of being open to some of the office and medical users that might be looking for a campus relocation," Alvis said. "[The] big picture is we’re not in a hurry to start anything small there because we don’t think that does anybody any good. We just want to make sure whatever we do there is a big splash and is big for the city [of Tomball], so we’re being patient.”

The shopping center was first scheduled to open last summer, but NewQuest announced in June the development would not begin construction in 2018.

Alvis said NewQuest Properties has owned the site in Tomball for more than 25 years and is therefore committed to seeing the property develop to its fullest potential for the city and Tomball-area residents.

"Because we have such a long-term focus there, we won't make a short-sighted decision," he said. "I can probably assure everybody we want [this development] to happen more than they do."
SHARE THIS STORY