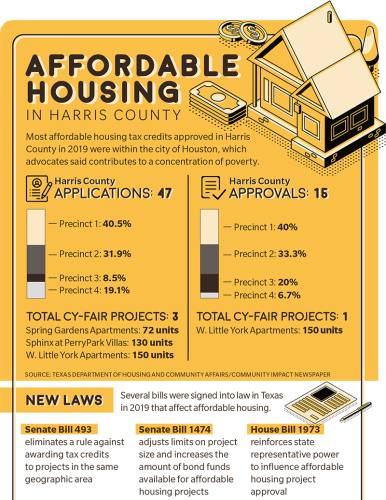 As Harris County officials work to address what some have deemed a crisis in affordable housing within the county, Cy-Fair-area legislators continue to use their power to prevent projects from moving forward.

Of three projects in the Cy-Fair area submitted to the Texas Department of Housing and Community Affairs for tax credit consideration in 2019, two were rejected after facing opposition from state representatives.

“The developers would find out and not even apply,” he said at a June 25 meeting of the Harris County Commissioners Court.

Commissioners heard a presentation from the county’s Community Services Department at the June meeting about how the county plans to become more involved in the affordable housing tax credit process. One of the goals is to get more projects approved in unincorporated parts of the county, CDS Assistant Director Christy Lambright said. The role state representatives play in the process will continue to factor in, she said.

“We’re looking at whether development has a letter of support from a state representative and whether the community around the project also had a chance to have some buy-in—what they think they would like for the community,” she said.

State representatives who helped block affordable housing projects in the northwest Houston area—including State Rep. Sam Harless, R-Spring, and state Rep. Tom Oliverson, R-Cypress—have said they are acting on behalf of their constituents who do not want the projects there.

“When it comes to allocating tax credits, subsidized by taxpayers, to low-income housing developers, it is imperative that state representatives retain their ability to represent the will of our constituents,” Swanson said in a statement.

In a 2016 interview, Oliverson said his constituents oppose low-income housing in Cypress. Oliverson declined to comment for this story.

As a part of its new approach to affordable housing Harris County plans to start passing resolutions showing support for certain projects up for tax credit consideration. The goal, in part, is to provide the city of Houston input from the county on projects within the city’s extraterritorial jurisdiction, Lambright said.

“They would see that support and won’t deny applications arbitrarily as a matter of course,” she said.