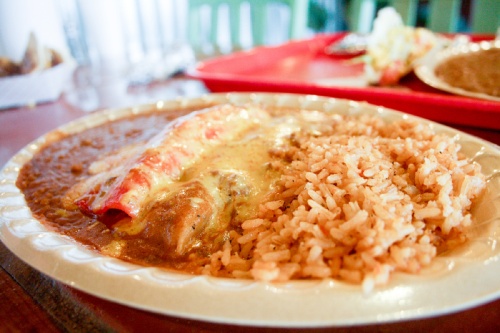 Mexican plate ($8.99) Includes one tamale and one enchilada with choice of beef, pork or chicken as well as one crispy taco, rice and beans

For many Mexican families, tamales are a popular finger food and a staple around the holidays, especially Thanksgiving and Christmas. For the Balderas family, they are a way of life.

Michael Balderas has been running Balderas Tamale Factory on Jones Road in Cy-Fair with his wife Juany and two daughters Alyssa and Arianna since 2011, but the restaurant’s history goes back much further than that.

The restaurant was founded by family patriarch Dan Balderas in 1998 in Round Rock before being relocated to the Houston area in the early 2000s. However, the family tradition of making and selling tamales to locals dates back even more, Juany said.

“We started by cooking our own tamales and selling them on the streets in Round Rock,” she said. “We did that for about a year, selling them to workers at machine shops and tire shops. They were so popular, [Dan] gave us the recipes to make them here in Houston."

As its name suggests, Balderas Tamale Factory specializes in tamales, with cooks making anywhere from 150-200 per day just during the off season. However, the restaurant also sells other Mexican dishes, including tacos, enchiladas and carne guisada, which typically come as a part of various platters served with rice and beans.

Dan first developed his recipe for tamales in 1967 with inspiration from his aunt. Although he tried to get his aunt to divulge the secrets of her recipe, she refused, leaving Dan to figure out what ingredients and spices to use on his own, his granddaughter Alyssa said.

“My grandfather was the root of what started our passion for tamale making,” she said. “We love what we do and, best of all, we can do it as a family.”

There is no right or wrong way to make a tamale, Alyssa said, but Dan’s recipe has garnered a large fan base over time. The restaurant, which has a 99-person occupancy, fills up around the holiday seasons, and lines can extend out the door during peak hours.

Juany attributes the restaurant’s popularity with its customers to the use of fresh ingredients.

“We take care of our ingredients,” she said. “Our chefs come in at 5 a.m. to cook the tamales fresh each morning. We don’t even order our ingredients in bulk. We get a little at a time to make sure they are as fresh as can be.”

Dan recently passed away Nov. 22 at 86 years old. His family said they will miss the late restaurateur but will continue to run Balderas with the principles he helped instill over the years.

“The most important things [my father] taught us were quality and consistency,” Alyssa said. “If you are consistent with the quality of the food, your customers will keep coming back to you.”