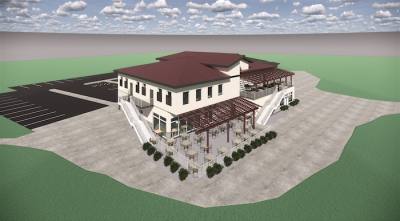 A full-service restaurant with an outdoor patio and event space capable of holding more than 350 people is part of the plan for a new convention center at the Jersey Meadow Golf Course, which could see a groundbreaking in Jersey Village this summer.

Jersey Village City Council unanimously approved design plans for the new center at a Feb. 18 meeting. The council has been working with architecture firm PGAL on the design since May 2018.

"I think this has been a great process," Council Member Bobby Warren said at the meeting. "It’s been a lengthy process, but I think we’ve arrived at a design that people love that is going to be very effective for what we’re trying to achieve."

City Manager Austin Bleess said he anticipates putting the project out for construction bids in April or May. Construction is estimated to last for 12 months, meaning the new center could open around summer 2020.

City officials came close to a final design at a Jan. 28 workshop, when council members showed a preference for a 11,500-square-foot design that would cost an estimated $3.6 million to construct.

Bleess said he expects the new center to attract clients looking to host events in the area and, if it opens in 2020, it could start generating a profit as soon as fiscal year 2022. Jersey Village Mayor Justin Ray reiterated the high hopes the city has for the center at the Feb. 18 meeting.

"I really like the fact that we have a space that large because once this is completed, we are not going to have a convention space similar to this in this general area," he said. "I think there will be a lot of attention, a lot of opportunity for the city to host a lot of events."

Bleess said the construction costs would be funded with general fund money and would be reimbursed by hotel occupancy tax funds over time.

View detailed site plans for both floors below.
SHARE THIS STORY