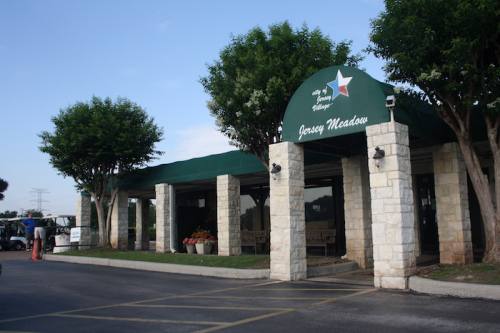 The clubhouse at the Jersey Meadow Golf Course will be replaced by a new two-story convention center.

Ground could break this summer on a new 11,500-square-foot, two-story convention center at the Jersey Meadow Golf Course.

Preliminary plans for the center include a 50-seat dining area; a bar; a golf pro shop and outdoor patio on the first floor; and event space for roughly 300 people on the second floor, including an outdoor balcony. Construction on the center is expected to last roughly 12 months, meaning it could open in summer 2020, city officials said.

At the meeting, council members debated the merits of two options for the center's design: Option A, a roughly 11,000-square foot center that could cost an estimated $3.5 million, and Option B, an 11,500-square-foot building that was estimated at $3.6 million. Officials unanimously expressed a preference for Option B, agreeing that the extra space was worth the extra cost..

"We’ve looked at Option A upside-down and sideways for weeks trying to squeeze a little more space out of it," City Manager Austin Bleess said at the meeting. "We want to make sure we get this done right for the next 50 years."

In explaining their preferences, Council Member Bobby Warren and Mayor Justin Ray both said the benefits of the extra space would be seen in revenue-generating parts of the facility, including the pro shop and dining area.

"We’ve got good square footage, and the features are good," Ray said of Option B. "I like that it flows better. The flow is good to increase the dining room numbers."

Matt Jones, head golf professional at Jersey Meadow, was among those advocating for Option B because of the extra space for the pro shop, which would be about 990 square feet instead of 720 square feet under Option A.

The estimated cost and size of the facility has grown since officials first began discussing the clubhouse in early 2018. At the May 2018 council meeting where the design contract was approved, officials were considering an 8,000-square-foot facility estimated at $1.2 million.

Bleess said the construction costs would be paid with general fund money and would be reimbursed by hotel occupancy tax funds over time. He said he felt optimistic that several planned projects in the city—including the convention center and plans for mixed-use development south of Hwy. 290—would result in a boost in hotel tax funds over the next few years. The city currently collects about $150,000 per year in hotel tax revenue, he said.

"With all the revenue this will generate ... fiscal year 2022 is kind of when we expect to see [the convention center] start taking off and hitting its stride and will start to be self-sufficient," Bleess said.

A final design will be presented to the council for approval at the Feb. 18 regular meeting. City staff could bring a construction contract for approval as early as the April or May meeting, after which a ground breaking will be scheduled.

The new convention center will replace the existing clubhouse at Jersey Meadow, which officials said is expected to remain open during construction.