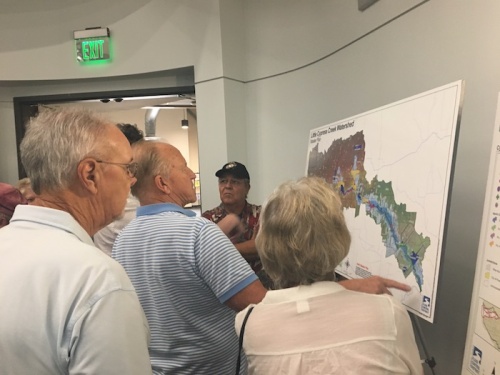 An effort by the Harris County Flood Control District to host community engagement meetings in each of the county's 23 watersheds turned to Little Cypress Creek this week, and priority projects are focused on preparing for future development in the area.

Residents were invited to a July 31 informational meeting at the Richard & Meg Weekley Community Center, where they were presented with plans for how money from a proposed $2.5 billion bond referendum would be spent in Little Cypress Creek. Residents also got the chance to provide feedback on the county's proposals for the bond, which will go before voters Aug. 25.

In Little Cypress Creek, an ongoing frontier program stands to benefit from the additional money if the bond passes, said Alan Johansen, an assistant project manager with HCFCD. The program entails creating a series of new stormwater detention basins and making channel improvements along the creek itself.

"The next step would be to pick up some key pieces of right of way so everything ties together and there are no broken links in the chain," Johansen said.

The portion of the watershed upstream of the Mueschke Road is largely undeveloped, but officials expect development to pick up over the next decade as the population in the Cypress area increases.

Although the county needs funding for land acquisition, the frontier program involves collaborating with developers when it comes to the cost of construction on detention basins, Johansen said. The county does the initial construction to make the detention basin functional, and developers make them bigger as development progresses.

The county, which owns the land where the basins are located, takes on maintenance responsibilities, Johansen said. The amount of detention required per acre of new development is also higher than what is required elsewhere in unincorporated Harris County, he said.

"It can be difficult to enforce maintenance standards on a private landowner, so we're taking the detention basins out of the hands of the developer and putting them in the hands of the county," he said. "What a lot of people don't understand about this program is that, as there's more development, there will be less flooding."

In addition to supporting projects within the frontier program, bond money would also be used for subdivision drainage improvements at several subdivisions along Little Cypress Creek, including Longwood Village, Northgate Forest and Rock Creek.

Bob Hilgendorf, a Longwood resident who attended the meeting, said he supports the bond proposal, but stressed that county officials need to stay on top of several projects that are being left out that he views as critical to addressing the larger problem.

"It's kind of reactionary, and it's kind of putting a band-aid on the problem," he said. "They have to get ahead of the problem, which probably involves creating a reservoir on the northwest side."

Hilgendorf said he thinks the bond has to be passed.

"If you take the cost of the damage done during the hurricane and compare if to the amount we'll spend, it's a drop in the bucket," he said.