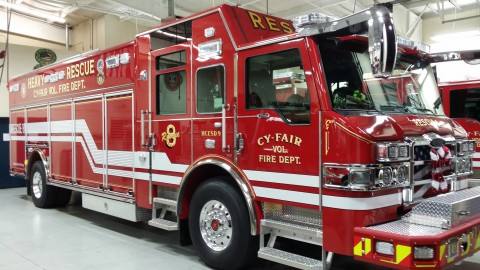 Seven candidates have filed to run in May 2018 elections for the Harris County ESD No. 9 board of commissioners.

Officials with Harris County Emergency Services District No. 9 have outlined the timeline for the completion of a new fire station in the Bridgeland area. Timelines were also updated for two replacement stations on Cherry Park Drive and Wortham Center Drive as well as renovations underway at Station 7 near Fairfield.

ESD No. 9 is the governing entity that manages the budget for the Cy-Fair Volunteer Fire Department.

Power has been brought to the new Station 2 on Wortham Center Drive, according to District Architect Ricardo Martinez. The next steps include finishing the interior design, and the station is expected to be ready for a walkthrough in early March, he said. Sidewalk and irrigation construction are ongoing.

Station 7—which was torn down and rebuilt on Cypresswood Drive in order to add capacity for an ambulance—is on a similar timeline as Station 2, Martinez said.

“That one is catching up because of it having the power first,” he said. “We anticipate an early March walkthrough as well. The sidewalks, irrigation and all of that are being worked on.”

Utility lines have been connected at Station 9, located on Cherry Park Drive, and interior framing and exterior work are in progress. Work on the station is expected to finish in mid-May or early June, Martinez said.

Station 13 will undergo inspection within the next few weeks, Martinez said. It will be ready for a final walk through in April, he said.

Meanwhile, repairs are underway on stations 3 and 5—located on Telge Road and Aspenglen Drive, respectively—to fix damage caused by Hurricane Harvey, including water damage and retiling. Most of the repairs for both stations have been completed, with tiling and grouting left as the finishing touches.

The district set aside $31.4 million for capital projects in its 2016-17 budget and $17.2 million in its 2017-18 budget, which was adopted in October. Commissioners also approved an effective tax rate of $0.052710 per $100 valuation in October, meaning the rate was lowered in correlation with increased property values to keep taxpayer bills that same.