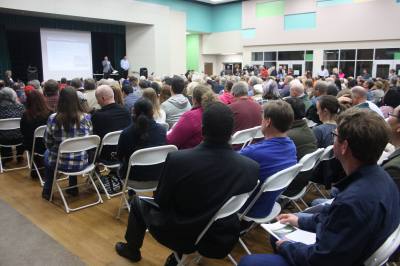 As part of the public comment period—which kicked off Dec. 22 and runs through March 9—the Federal Railroad Administration hosted public forums in each of the 10 affected counties. The audience at the Harris County meeting included residents from several of the affected counties. Most attendees who provided a verbal comment, including members of Texans Against High-Speed Rail, spoke in opposition of the project.

Common concerns included potential noise effects, aesthetics, disruption of wetlands and agricultural land, lack of ridership, flooding and drainage issues, eminent domain and skepticism over how much traffic congestion in Houston and Dallas would be relieved. Residents were also concerned that taxpayers would end up funding the high-speed rail.

Gov. Greg Abbott signed Senate Bill 977 last May, which ensured the state could not financially support the $12 billion project. State Rep. Tom Oliverson, R-Cypress, who attended the forum, said it is still unclear whether local counties or the federal government will contribute.

Oliverson said the project would not necessarily benefit his constituents, and many voiced their concerns about families and businesses being disrupted.

“The idea that you could condemn private property and give it to a private enterprise for the purpose of redevelopment… just seems un-American to me,” he said. “I hope that the folks here that are taking the comments are listening carefully to the issues that are being raised because I think there are several unanswered questions.”

As currently proposed, Texas Central plans to operate the system from 5:30 a.m.-11:30 p.m. daily. With trains leaving each terminal station every half hour, a total of 34 trains will travel both northbound and southbound each daily. Officials with Texas Central say the project is vital to mitigate traffic congestion as the population in Houston and Dallas continues to grow.

The train—which uses Japanese N700 Tokaido Shinkansen technology—would travel up to 205 miles per hour, allowing for 90-minute trips between Dallas and Houston with one stop in Brazos Valley. Texas Central estimates the bullet train will have 5 million riders in 2026 and 10 million by 2050.

Texas Central officials announced yesterday their preferred location for the Houston station, but the FRA still has three options on the table, according to Kevin Wright, environmental protection specialist with the FRA.

“No final decisions have been made,” he said. “We are still very much in the middle of this process.”

During the public comment period, comments regarding the Draft EIS can be submitted online, via email to [email protected] or by mail to Kevin Wright, Federal Railroad Administration, 1200 New Jersey Ave. SE MS-20, Washington, D.C., 20590.

The FRA will record all comments as part of the Final EIS, which will include updates on items discussed in the Draft EIS, a formal response for each comment and a summary of all Draft EIS comments.

Once the Final EIS is published for public review, the FRA will make a determination on the Rule of Particular Applicability and issue a Record of Decision. Texas Central officials have said they hope to begin construction in 2019.
SHARE THIS STORY