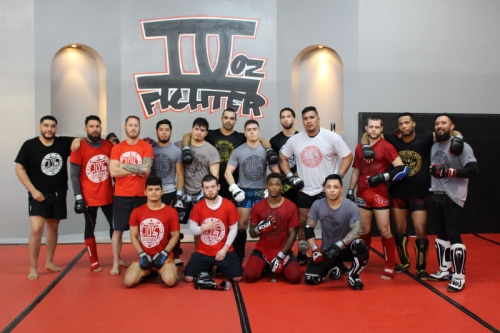 Fighter training is available at the gym, which has produced dozens of professional fighters.

Soliz started training at 4 oz. Fight Club in 2009 and bought out the business the following year at the former location on FM 1960 near Jones Road. At the time, the operation was heavily focused on fighter training, but he soon rebranded the concept as 4 oz. Mixed Martial Arts, incorporating more fitness classes for men, women and children.

“I thought ‘4 oz. Fight Club’ was a little intimidating,” he said. “These guys were so hardcore in fighting that that’s all they wanted to do, but what was going on at that time was fitness, family programs, boot camps.”

While diversifying the gym’s offerings, Soliz said 4 oz. still maintains one of the most well-known fight teams in the state, sending people to the highest levels of MMA and having up to 60 active fighters.

Because of the variety of disciplines taught at 4 oz.—named after the weight of boxing gloves used in competition—members have the opportunity to develop a well-rounded skill set including coordination, endurance and confidence, he said.

Soliz brought on coaches Daniel Pineda and Joseph Mccamish as partners and relocated from FM 1960 to the gym’s current location last September. In times of increased overhead costs and economic turmoil, Soliz said his gym members inspired him to persevere to keep the doors open.

“I’ve had so many people over the last 10 years express to me how this gym has transformed and changed their lives in a positive way,” he said. “You could pretty much say that I’ve always made my business decisions with my heart. A lot of people have said, ‘Hey man, you’re dumb for continuing to do this when you’re struggling [financially],’ but we’ve made it through some tough times, and now we’re on solid foundation.”