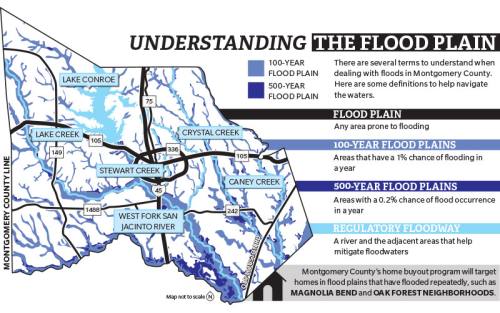 On Sept. 19, less than one month after the second anniversary of Hurricane Harvey, Montgomery County was hit by another major storm—Tropical Depression Imelda. According to Darren Hess, director of homeland security and emergency management in Montgomery County, about 1,500 homes in the county were affected.

At a Sept. 24 Commissioners Court meeting, commissioners approved a notice to proceed with Hagerty Consulting, an emergency management consulting firm, to conduct safety assessments and collect data to assess the storm damage. The assessment ties into the county’s flood plain management, and data on the number of damaged homes could be used for the county’s home buyout program, Hess said.

The county is already moving forward with home buyouts for Hurricane Harvey damage. Approximately 400 homes could be eligible for buyouts through Federal Emergency Management Agency funding, according to county officials.

Hess said the county currently has one $8.8 million FEMA home buyout program for Hurricane Harvey and two lesser programs for 2016 floods. Hess said the county has applied for another Harvey recovery program for approximately $12.9 million. He said there is no specific area in the county the new program would target—just any home in the flood plain that has suffered repeated losses.

“We want them to be able to move out and acquire another piece of property; hopefully, in Montgomery County,” Hess said.

Montgomery County Floodplain Administrator Diane Cooper said many homeowners think the home buyout offers are too low, but she suggested they take into consideration factors such as floodways and changing markets. She said homeowners can also go through an appeal process if they want to challenge their valuation. Cooper said buyouts are voluntary, and homeowners must volunteer for the program to be considered.

Although the Harvey buyout program is focused on homes in the flood plain, Cooper said there is a lot of confusion from residents surrounding what the terms 100- and 500-year flood plains mean on the FEMA flood insurance map.

“[The FEMA flood insurance map] will not tell you whether you will or will not flood. I guarantee you we have flooding outside the flood line,” Cooper said.

Hess said millions of dollars have already been given to help Montgomery County residents recover, but it is hard to determine the exact amount as various organizations have had a hand in the process, including the Red Cross, FEMA and United Way.