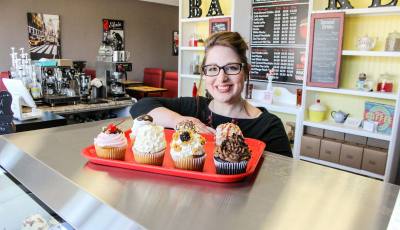 By the time BabyCakes Bakery owner Amanda Cano opened her dessert shop in August, the Conroe native had already made her mark locally and on the small screen.

In 2015, Cano competed against four other bakers from across the U.S. on the Food Network TV show “Bakers vs. Fakers.” Cano won the competition by baking a family recipe—her Uncle Jim’s bread pudding—and then with a signature creation, her Golden Ticket stuffed cupcake.
Previously, BabyCakes Bakery was already a recognized brand in the Montgomery and Willis area. As the daughter of local restaurateurs John and Claudia Simmons, founders of Pizza Shack, Cano baked the restaurant’s desserts for 15 years.

“I’ve always been very thankful for my time at the Shack and everything I’ve learned from there, but at the same time I wanted to be known as my own thing,” Cano said. “It was very validating that [the show] knew nothing about the restaurant; they knew nothing about my family—it was just about me.”

Cano’s passion for baking started at an early age when she would help her grandmother bake desserts for the restaurant’s two locations.

After years of baking her family’s recipes, Cano made her own imprint by downsizing her homemade, chocolate-stuffed mousse cake into a flavor-packed stuffed cupcake. In 2012, BabyCakes Bakery was created, but Cano continued to operate and sell her desserts out of Pizza Shack in Montgomery.

In early August, Cano used her “Bakers vs. Fakers” winnings to open her stand-alone location off Hwy. 105. BabyCakes Bakery serves a variety of homemade, gourmet desserts as well as coffee beverages in a ’50s-era atmosphere.

“My philosophy in baking is that every component should complement each other—it’s all about balance,” she said. “[A flavor] should be great enough to stand on its own, but when it’s all put together, it creates this amazing thing.”