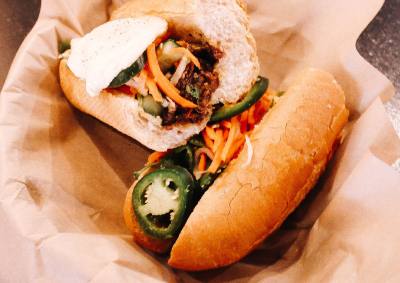 A baguette is topped with pork, garlic butter, vegetables and a fried egg.

One man has turned his love for craft beer into several businesses, serving dozens of different taps of locally owned brews.

The Bay Area result is Nobi Public House, an artsy eatery on NASA Parkway that dishes out Vietnamese cuisine and frothy beer.

Owner Charles Nguyen moved to the Houston area from California about 15 years ago to help his dad and uncle with a gas station in Friendswood. It did not take long for Charles to begin stocking it with several varieties of craft beer, which could be a challenge.

“Back then, it was really hard to find craft beer down here,” Charles said. “Now, 75% of my gas station is beer.”

Around 2009, Charles and his brother, Andy, opened Nobi Asian Grill next door and began serving Vietnamese food they grew up eating. Charles took a “selfish” approach, serving the dishes and beers he liked to eat and drink, he said with a laugh.

The restaurant quickly grew in popularity, and soon Charles had the itch to open another restaurant with more taps. Nobi Public House opened in 2012 and now serves nearly 70 different beers that are constantly on rotation, Charles said.

After Nobi’s success, Charles and his wife, Kyler, opened Wander Market and Hyde Park Wood Fired Kitchen next door to the pub. Charles never intended to open and run several businesses, and he wants to take things slow for the time being, but he is open to possibilities, he said.

“I somehow stumbled upon my niche,” Charles said.

One of Nobi Public House’s main attractions is pho served only on Sundays. People will line up out the door to get a bowl, and it has sold out in as quickly as two minutes, Charles said.

“It’s still a trip to me when I walk over and see a line outside of our place,” he said. “It’s pretty cool.”

Despite his love for beer and Vietnamese cuisine, Charles said he really appreciates the people he works with. Most of his staff has been with him since he opened, and the support of Kyler pushes him, Charles said.

“People that have been with me are family to us,” he said. “They help us grow, and it’s a beautiful thing.”

Here is a roundup of local business news from Clear Lake and League City.

After landing a module on the moon in the first quarter of 2022, Intuitive Machines plans to make an annual effort to send hardware to the lunar surface, and it will do its work from the Houston Spaceport.