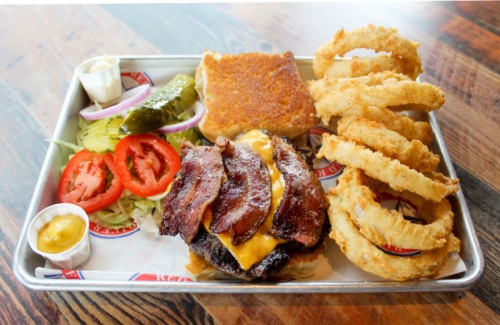 For 16 years Kevin and Ric Kiersh have been serving up barbecue and grilled delicacies at the locally owned and -operated Red River Bar-B-Que & Grill in League City.

Now the brothers are preparing to venture into uncharted territory. The two aim to open Red River Cantina, a Tex-Mex restaurant, in November.

The cantina will not just offer food one cannot get at Red River BBQ & Grill; the atmosphere will be different, considering the concept includes a 36-person bar and waiter service. It is a bit more mature than the cozy, family-friendly vibe of the original restaurant and its counter-order service.

Two years after opening in 2002, the brothers added “& Grill” to their restaurant name and started selling food besides barbecue. Now the restaurant provides burgers, seafood, chicken, steaks, soups, salads and more, all with a Southern feel.

“We’ve got a little bit of everything,” Kevin said.

The Kiershes consider Red River BBQ a staple in the community. They have seen families with children grow up in their restaurant, and Red River BBQ employs cashiers who ate there as babies.

That focus on family is part of the reason the brothers want to open a Tex-Mex restaurant. Their great-grandmother was born in Guadalajara, Mexico, and fled to League City to escape the Mexican Revolution, and the Kiershes grew up enjoying Mexican dishes.

“We have a long Texas heritage in our family, but also another side of our family comes from Mexico,” Ric said. “A lot of our recipes are old family recipes.”

Red River Cantina is being developed in Red River Bar-B-Q & Grill’s original location, next to its current spot at 1911 E. Main St. The brothers are not worried the restaurants will compete with each other.