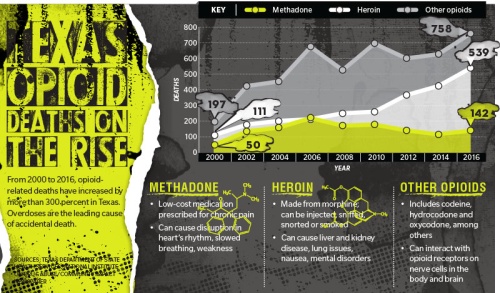 Suburban areas, such as Spring and Klein, are not immune from the national opioid addiction epidemic, which has claimed an increasing number of lives in Texas in the past two decades, according to local experts in drug addiction and recovery.

“In the Spring area, it absolutely is [a problem],” said Christina Windam, owner of The Windham Center on
FM 1960, a facility that offers court-ordered drug offender education programs. “People don’t want to talk about it, so we pretend to not see it.”

Opioids include prescription painkillers like OxyContin—the brand name for oxycodone—as well as heroin, which addicts often turn to when they can no longer obtain prescription drugs, said Jane Maxwell, a research professor with the School of Social Work at The University of Texas who specializes in substance abuse trends.

“[OxyContin] was going to be a long-term pain reliever that was going to be wonderful,” Maxwell said. “It was, shall we say, oversold. Then people get on it, they get addicted and they go into withdrawal so it sends them to heroin.”

The opioid epidemic claimed nearly 40,000 lives in the U.S. in 2016, according to the Centers for Disease Control and Prevention. Of those, nearly 1,500 deaths occurred in Texas, according to the Texas Department of State Health Services.

Monica Villarreal, a mental health policy fellow at the Austin-based Center for Public Policy Priorities, said President Donald Trump declared the opioid crisis a national public health emergency on Oct. 26, meaning existing funds could be reallocated to the issue, although the federal government will not increase spending.

Mary Beck, chief strategy officer at The Council on Recovery, said the Houston nonprofit receives about 1,200 calls every month from people across the Greater Houston area seeking help for themselves or a loved one dealing with addiction. Overdoses are the leading cause of accidental deaths in the U.S., and the same statistic is true for Houston, she said.

State Rep. Kevin Roberts, R-Spring, said in his district—which includes the Spring and Klein area—opioid addiction affects residents just as much as any other region of Texas.

“We’re not immune to the issue,” he said. “These drugs don’t care about your affluence or your [location] or demographics.”

In May, the Texas Health and Human Services Commission received $27.4 million in federal funds to prevent and treat opioid dependence. The money will help about 14,000 patients over two years by expanding access to and capacity at treatment centers, increasing prescriber training and enhancing recovery services, according to HHSC officials.

Federal funds have also been directed to several programs in Harris County.

“We have received some [federal] opioid abuse and mental health funds for the Healthcare for the Homeless Program from the Health Resource and Services Administration,” said Denny Anderson, director of grant accounting with Harris Health System.

The state of Texas has also started to address the issue. In the 85th Texas Legislature this summer, lawmakers passed Senate Bill 584, which called for the Texas Medical Board to develop guidelines for the prescription of opioid antagonists—drugs that block the effects of opioids.

Roberts, who will serve on the committee, said he believes accountability starts with pharmaceutical manufacturers and trickles down to the physicians prescribing drugs. However, he said he believes federal, state and local government plays an important role as well.

“My goal is that we identify causes to the issue, programs and treatments that have worked historically and … we assure that we have an adequate number of treatment facilities and programs and that we fund them adequately,” Roberts said.

Although law enforcement agencies in the school districts and in the county do not track the number of opioid-related incidents in Spring and Klein, officials said the problem is on their radar, and they aim to address it through measures such as education, prevention and police training.

Collaboration between schools and law enforcement on substance abuse issues is addressed through participation in programs like the Drug Enforcement Administration’s National Prescription Drug Take Back Day held each year, Kimberly said. The day offers an opportunity for community members to dispose of expired or unused prescription drugs.

Spring ISD Police Department also participates in the program, Chief Victor Mitchell said. SISD police and health departments have not witnessed signs of opioid use among students, he said.

“It has been my experience [that]illegal drug activity leads to the commission of other crimes,” he said. “Our deputies have in some cases got into physical confrontations with suspects that have overdosed on these opioids.”

Awareness of the opioid crisis has led some doctors to restrict prescription narcotic access for individuals who are in genuine need,  causing them to seek pain relief through illegal channels, said James Miller, manager of the controlled substances section of the Houston Forensic Science Center.

Miller said these illicit pharmaceuticals have seen a surge in popularity in the last two years. According to the Harris County Precinct 4 constable’s office, the number of arrests for possession of synthetic narcotics nearly doubled from 2014 to 2016—from 95 to 177 arrests.

“If they can’t get help they have to go to the street, and what was a manageable addiction is now a life-threatening addiction,” Miller said.

Multiple facilities in the Spring and Klein area offer treatment and recovery options, including medical detox and state-required education programs like those offered at The Windham Center.

The Council on Recovery serves patients through intensive outpatient clinical services and its Center for Recovering Families, which offers therapy and education for addicts, their children and family members.

“I do see hope in the sense that we’ve been here before,” Beck said. “We’ve had other drug epidemics, but it took efforts at the federal, state, local and individual level.”

The 6,500-square-foot facility offers a sober living environment and support services for people trying to return to a normal life after alcohol and drug abuse, including opioid abuse. The facility generally accommodates about 20 people but has housed as many as 40 people at one time, Burkholder said.

“I know what it takes to get sober,” Burkholder said. “It’s about making a decision and getting the steps done.”

For some individuals, the path to recovery is complicated by the cost of the programs.

Ben Taub Hospital, operated by Harris Health System in the Texas Medical Center in Houston, offers a substance abuse outpatient clinic free to residents of Harris County who cannot pay for the service and whose income is 150 percent of the federal poverty level or less.

Asim Shah, chief of psychiatry at Ben Taub Hospital, said Harris Health System has reallocated funds to expand that program, but it has not received additional state or federal money.

“What is not reported on is how little funding we have from the state, from agencies for this problem,” Shah said. “I see these people in the emergency room … who are victims of substance use, [and] all of them want to get better. All of them hate it, but they don’t know how to get out of it.”