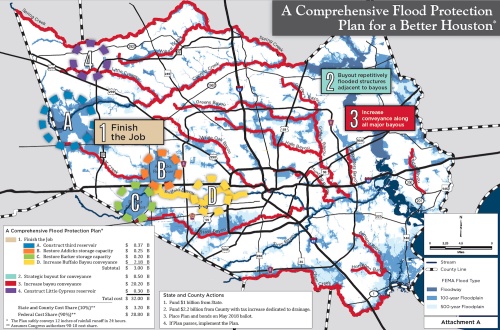 Several Houston area groups have collaborated to come up with a plan for how federal Harvey relief funds should be spent.

As the U.S. House of Representatives is preparing to pass a third and presumably final Hurricane Harvey relief package within the coming days, state and local officials are fighting to make sure future flood control projects are funded.

Congress passed $15 billion in Harvey relief in September, and an additional $36.5 billion was passed in October to be distributed across Texas, Florida and Puerto Rico.

However, that money was mainly set aside for the Federal Emergency Management Agency to provide relief to individuals and to pay off debt accumulated by the National Flood Insurance Program. Funding for flood-proofing the affected communities—including for reservoir construction and home buyouts—is still greatly needed, according to state officials.

Gov. Greg Abbott has called for $61.8 billion in additional funding for Texas in the next package to fund projects identified in the Rebuild Texas plan. About 60 percent of Abbott's requested funding would go toward flood-proofing to prepare for future storms.

A Commission to Rebuild Texas was established to seek input from local officials in the affected areas to determine what projects need to be prioritized.

Although the Rebuild Texas plan would improve flood control in the City of Houston and around the Addicks and Barker Reservoirs, a group of local organizations are advocating that the funding be used to provide more comprehensive flood protection for the rest of Harris County.

The group—which includes the West Houston Association, North Houston Association, Greater Houston Builders Association, American Council of Engineering Companies of Houston and the Katy Area Economic Development Council—released A Comprehensive Flood Protection Plan for a Better Houston, which is aligned with plans laid out in Rebuild Texas but differs in several key areas.

Augustus Campbell, president of the West Houston Association, made a presentation to the Cypress Creek Flood Control Coalition Nov. 15. Here are several proposals for how Harris County should use federal funding as laid out in the Better Houston plan:

Both the Rebuild Texas plan and the Better Houston plan make the construction of new reservoirs and the restoration of the Addicks and Barker reservoirs key parts of the solution.

Both plans call for the construction of a third reservoir in the Cypress Creek watershed to alleviate pressure on the two existing reservoirs, and both plans call for the U.S. Army Corps of Engineers to complete a restoration report for Addicks and Barker to determine the best way to restore them to their original capacity.

A top goal of the Better Houston plan involves improving conveyance to the point where 12 inches of rainfall runoff can pass through every bayou in the Greater Houston area within 24 hours, Campbell said. He identified Sims Bayou as an example of where this goal has already been reached.

The Sims Bayou project, which was completed by the U.S. Army Corps of Engineers in 2015 at a cost of $395 million, paid for itself in terms of how much damage was prevented during Harvey, Campbell said.

"Zero homes flooded along Sims Bayou during Harvey," he said. "The bayou did not even overflow its banks."

“If all we do is build the third reservoir, we’ve absolutely made a mistake," Campbell said. "It’s really important that we continue to beat that drum for conveyance. If you have good conveyance through your area, you will have the most efficient and resilient solution to flooding.”

Both plans call for a significant amount of money to be spent on home buyouts.

The key difference in the Better Houston plan is that buyouts are targeted at homes along bayous that experience repeated flooding, Campbell said. Buying out these homes serves an additional strategic purpose in that it also allows the county to pursue conveyance improvements along those bayous, he said.

The federal cost share of all projects identified in the Better Houston plan is $28.8 billion. The plan also calls for a $1 billion contribution from the State of Texas and a $2.2 billion contribution from Harris County, which would be raised with an 4 cent tax rate increase for flood control projects. The plan and accompanying bonds could be placed on the May 2018 ballot for voters to support or reject.