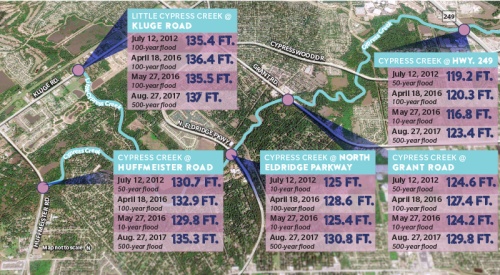 Cypress Creek has overflowed multiple times since 2012, resulting in a frequency of flooding that has exceeded expectations.

Over the course of three days in July 2012, approximately 14 inches of rain fell on parts of northwest Harris County, causing Little Cypress Creek to overflow at Kluge Road.

Creek elevation reached 135.4 feet, about 2.3 feet above the top of the bank, resulting in a type of flooding that is predicted—based on expert estimations—to have a one percent chance of flooding in any given year.

On April 18, 2016, the creek flooded again with an elevation of 136.4 feet in an event known as the Tax Day Flood. Evacuations took place in the nearby Stable Gate community, where many of the neighborhood's 250 homes took on water.

Then, on Aug. 27, 2017, as rain from Hurricane Harvey poured down, the creek reached 137 feet, enough to exceed 500-year levels. Many of the homes that flooded during the Tax Day Flood flooded again, and worse than before.

Little Cypress Creek at Kluge Road is one of many locations in Cy-Fair and in the Greater Houston area where flooding has routinely exceeded expectations. The quick succession of these events has led Harris County Judge Ed Emmett to describe the frequency of flooding as the “new normal.”

In the aftermath of Harvey, which damaged an estimated 136,000 homes in Harris County, Emmett said the county must look at every flood risk management proposal being discussed. He said his personal priority is to identify all of the planned projects that are ready to go—including projects to widen Brays and White Oak bayous—and secure their funding.

In total, the Harris County Flood Control District has about $26 billion in infrastructure upgrades identified. Emmett said he also wants to look at other projects, including a third reservoir in the Cypress Creek watershed.

“The way those get built is the county currently spends $60 million a year [on flood risk management projects], but then we get reimbursed by [the Federal Emergency Management Agency],” Emmett said. “Well, that’s not enough money. So, I would like Congress to come up with a way to frontload the money from FEMA so that we can get those done and completed.”

A common refrain from Emmett at an Oct. 4 event hosted by the Cy-Fair League of Women Voters was a lot of flood planning in Harris County is directed by faulty assumptions about how stormwater travels through the system. He said watershed maps in the region need to be re-evaluated.

Byron Williams, chief of project management for the U.S. Army Corps of Engineers, Galveston District, said the Corps is waiting for federal funding to implement a new Houston Regional Watershed Assessment, which will examine all 22 watersheds in the Greater Houston area.

Williams said the three-year, $3 million regional study aims to develop a comprehensive plan showing the Corps where to focus its efforts. Williams said he is confident the study will receive the necessary funding but is not sure when it will begin.

The Corps studies have traditionally looked at individual watersheds and solved problems for each bayou or creek. Williams said this plan will ensure the Corps looks at how a project in one watershed affects a different watershed.

“All of the bayous [and creeks] are connected, and so if you don’t treat them as a connected part, then you’re not going to solve the problem as a whole,” Williams said.

Meanwhile, the Texas Water Development Board is conducting a statewide flood plan—the first-ever endeavor of this kind in Texas—using $600,000 provided by state lawmakers earlier this year.

Over the next year, the board will evaluate state flood risks and assess plans that local flood officials have prioritized in their communities. TWDB Officials hope to have a plan in place in time for legislators to consider it when funds are allocated in the 2019 session.

“We have homes that were built along the 500-year flood line … that turns out to be a not very useful line,” Emmett said. “Those people have lived there a lot less than 500 years, and they’ve flooded several times.”

Emmett said the requirements in place dictating how much retention a developer needs to install in order to offset the flood effects of a new development need to be reviewed as well.

“In theory, the developer is required to establish an amount of retention that limits the increase [of flooding] downstream to what it was before,” Emmett said. “Obviously, that hasn’t been right. Something is not right when you have this amount of flooding over and over.”

The Greater Houston area has naturally always been flood-prone, said Erin Kinney, a research scientist at The Woodlands-based Houston Advanced Research Center. It is a coastal area traversed by bayous and wetlands, consisting of mostly clay-based soils that drain poorly. And development in certain areas has exacerbated the issue, she said.

As Houston was developed, wetlands were paved over and replaced with impervious surfaces, such as streets, parking lots and roofs, that do not soak up water, Kinney said. According to HARC’s Galveston Bay Report Card, the Spring Creek watershed—which contains most of northwest Harris County—lost 10 percent of its wetlands to development between 1996 and 2010.

Emmett said he could not say when new development guidelines could go into place. He said pushing tougher regulations on developers can be tricky because, if a developer is able to argue the company has met the standards in court, it can sue the county for what is considered confiscation of property.

“As long as they meet whatever the bare minimum code is, they can do it,” he said. “That’s the problem. We have got to change that.”

Unlike Brays and White Oak bayous, Emmett said Cypress Creek is not one of the creeks or bayous where large-scale improvement projects are ready to move forward. However, Emmett said he and Precinct 4 Commissioner Jack Cagle are aware the creek needs work.

“Everybody understands Cypress Creek needs work,” Emmett said. “But when? It becomes a question of money and how we find the resources to do it.”

Several neighborhoods along Cypress Creek in Cy-Fair have been subjected to repeated flooding over the past few years, including Stable Gate, Ravensway and Northlake Forest.

Emmett said the county is looking into the construction of a third reservoir in the northwest part of the Cypress Creek watershed that would detain water as it travels downstream. The idea was originally discussed around the time the Addicks and Barker reservoirs were built in the 1940s, but action was never taken, he said.

“The third reservoir seems to be one of those projects that almost everybody agrees ... is certainly worth looking at,” Emmett said. “And rather than spend years deciding, we need to get on that right now and make a decision.”

Richard Smith, president of the Cypress Creek Flood Control Coalition—a nonprofit organization that works to mitigate flooding in the Cypress Creek watershed—said a reservoir in the watershed would help mitigate flooding. Smith said he believes the county needs to act fast and purchase a tract of land large enough for a reservoir before it is purchased by developers.

Emmett said the U.S. Army Corps of Engineers, which is funded by Congress, would work with the county to build a third reservoir if the county and the Corps determine it to be necessary and are able to secure the funding.

At an Oct. 3 Harvey informational meeting in West Houston, Texas Lt. Gov. Dan Patrick told residents he is open to providing state funding for the reservoir as well as several other major flood projects in the Greater Houston area. U.S. Rep. Michael McCaul, R-Houston, said he was working to secure congressional funding for a third reservoir in a future Harvey relief bill.

Patrick acknowledged it may be difficult to persuade state and federal representatives to approve such a price tag for a project specific to the Greater Houston area. However, he said he believes it is also necessary to protect the region’s oil and gas industry, which accounts for approximately 45 percent of the nation’s petroleum refining capacity and 51 percent of U.S. natural-gas processing plant capacity, according to S&P Global.

“It is time, in my view, that we move forward and we build that dam on Cypress [Creek],” Patrick said. “These are going to be expensive projects, but we have to do them.”