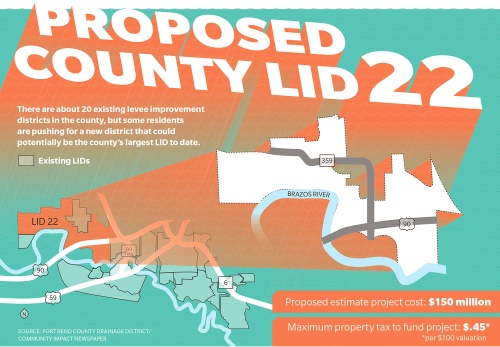 The overflow of the Brazos River during Hurricane Harvey coupled with the over 30 inches of torrential continuous rainfall that pounded the Texas coast may have overpowered the drainage systems within the county’s levee improvement districts, but they still operated to required standards, according to Fort Bend County officials.

While some experienced flooding and others watched as floodwaters rose up their driveways but never entered their homes, many residents were left wondering how well the drainage system within their levee improvement district performed and what is being done to better prepare for future storms.

What is a LID?

Similar to a county or school district, a levee improvement district–also referred to as a district or LID–is a political subdivision that covers a specific area of land to provide flood protection, drainage improvements and to reclaim land from the flood plain, according to First Colony LID attorney Angela Lutz.

When a LID is first formed, developers advance all the funds for the levee and related facilities and then start selling land and develop the area to construct a tax base. After sufficient development, the district issues bonds to reimburse the developer, according to county officials.

The residents within a district pay back the bond for the levee and maintenance of the district operations through taxes. More developed districts with a stronger tax base have a lower tax rate than less developed areas. The age of a district and commercial and residential development are all factors that can affect the rate.

Like municipal utility districts, some of which have their own levee systems in place, LIDs are monitored by the Texas Commission on Environmental Quality, the Texas Attorney General, counties and cities.

Commissioners appoint three board directors who must meet requirements like being a property tax-paying elector of the county and a resident of the area. Directors are required to take continuing education on levees, flood fighting and national issues, according to Lutz.

“LIDs in Texas, and MUDS also, are one of the most heavily regulated types of political subdivisions,” Lutz said during a First Colony LID public meeting in October.

While the board of directors are essentially the decision-making body of the LID, they hire consultants who advise the board and implement their decisions. There are about 20 levee districts in the county, and each one has components specific to itself, such as if a district has a pump station. These levee districts are largely responsible for the substantial growth rate in Fort Bend County because they removed land from the flood plain that otherwise would not have been developed.

“If you look at Sugar Land and the newer parts of Missouri City and parts of Richmond, almost all of that development would not have occurred if we had not had levee districts,” said Richard Muller, principal of Muller Law Group, a law firm that represents several Fort Bend County LIDs.

While the main purpose of a LID is to provide flood protection from the river through a levee, there are many components to a district that comprise each system: earthen levees, pump stations, detention ponds, drainage ditches, flap and sluice gates. Whether a district employs these different components depends on its location, the developer, the residents, funding and a multitude of other factors, according to county officials.

Although districts have their own characteristics, many are connected through an exterior levee that consists of different districts tying into one another. Fort Bend County Drainage District Manager Mark Vogler said all of the districts in Fort Bend were independent to begin with, but as more and more districts started to form, they began to tie into one another to avoid duplicating efforts.

Vogler said even more districts started to connect to the exterior levee after the Brazos River flood plain was remapped. The need for a remapping started back in the ’90s when the county noticed the river had inconsistent flow rates. Nearly 10 years and $50 million later, each district was required to raise their levee.

“Instead of raising all the internal levees, they just all got together and raised the external levee that protects all of them,” Vogler said. “They depend on each other to some degree.” Several districts have held public meetings to try and educate residents on how their district performed during the storm. One of the most critical points being made at these meetings is that regardless of whether a home flooded, all of the levees in the county performed accurately.

Most levee districts protect residents from two different types of events: flooding from the Brazos River and intense rainfall within the communities. Harvey created both of these situations at the same time, overwhelming many systems across the county, according to city officials and LID engineers.

“The amount of rainfall that fell within the communities was three to four times greater than what they are designed to handle,” Muller said. “No system failed anywhere.”

During a First Colony LID public meeting in October, Frank explained the funnel-like design of the storm sewers made it appear the water was draining slowly from the streets, but in reality, it was draining regularly.

“The top of that funnel has a lot of surface area to it,” Frank said. “Even though it is dropping consistently, it doesn’t seem to be.”

Frank said he does not expect the flood plain to be remapped any time soon.

Every Fort Bend County LID is working to conduct After Action Plan reports that will explore what improvements can be made to the district and the estimated costs of those improvements, according to Lutz.

“Some might have to get additional bonding authority if they don’t have enough bonding capacity,” Lutz said. “It depends on each LID.”

The case for LID 22
For some residents along the FM 359 corridor in Richmond who have experienced record-setting flood events back to back, Harvey was the last straw. Some of the neighbors in the area, along with representatives from Jones Carter, an engineering firm involved with many county LIDs, have formed an unofficial steering committee over the last year in an effort to gain support to create LID 22.

“If it completely formed, it could be … the biggest district in Fort Bend County,” Vogler said.

One of the biggest proponents behind the formation of LID 22 is Ed Harrigan, a River’s Edge resident. Over a year ago, Harrigan organized a meeting with U.S. Rep. Pete Olson, R-Sugar Land, and county politicians to see about forming a district.

Fort Bend County Judge Robert Hebert recommended a levee be formed to protect the surrounding communities, and since then, Harrigan has been actively involved in trying to make the levee a reality. He said the steering committee and supporters of the LID have met unofficially from time to time, but no seed funding has been secured and no plans are official.

“[The steering committee’s] goal is they want to have one or two people from each subdivision speak on behalf of the residents,” Harrigan said. “We need to organize into an official organization ... so we can make decisions.”

While most districts are formed before the land has been developed and are sought out by developers, Harrigan said LID 22 is a special case since residents seem to be the main push toward the creation of a district there. Another factor that makes LID 22 special is the fact is almost half of the land in the designated area is already developed, which would make gaining complete support for the district more complicated.

A financial adviser told Harrigan that completing the first few steps to form a district would require $500,000, with the total project cost upward of $150 million.

Harrigan said there are many more steps ahead to creating the district, like securing seed funding, gaining support from the residents and conducting studies to research how a levee could affect the surrounding areas. He said he thinks the most important next step is to create an official political organization that can locate the resident’s goals and initiate plans moving forward.

“It’s not going to be just a slam dunk—it would take a lot of education, a lot of communicating,” Harrigan said. “I think the LID will be created eventually; I just would rather we don’t go through several more floods before everybody wakes up and agrees it is a necessity.”
SHARE THIS STORY