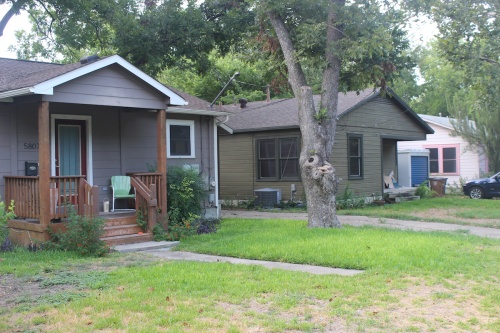 After failing to increase property tax relief last year, Austin City Council on Thursday narrowly approved an increase to the homestead exemption from 8 percent to 10 percent for fiscal year 2018-19.

This means the homestead exemption, one of the lone property tax-relief tools available to council, will exempt 10 percent of a home’s appraised value from taxation. The move comes just before council begins drafting next year’s city budget.

The move comes as property appraisal protests in Austin this year are expected to hit a record high.

The exemption is projected to result in a $4.8 million hit to the city’s tax revenue.

Council squeezed out a 7-4 approval of the increase, with council members Jimmy Flannigan, Delia Garza, Greg Casar and Kathie Tovo voting against the exemption. The increase needed seven votes to pass on all three readings, which was crucial Thursday in order to meet a state-mandated deadline.


Is it real relief?

District 8 Council Member Ellen Troxclair, the lone conservative voice on the dais, sponsored the item. Troxclair, who has been away on maternity leave for several months, has been an outspoken proponent of local tax relief.

“This is one thing that we can to do to show the middle class, the average homeowner, that we care about them and are listening to their pleas when they tell us they can’t afford to live in the city anymore,” Troxclair said. “It’s not a magic bullet, but people every day feel nickeled and dimed. They constantly see increases in property taxes and fees.”

However, members of the public and other council members asserted the exemption did not provide substantial relief except to wealthy homeowners and that the tax revenue hit would limit council’s ability to fund programs.

Mayor Steve Adler said the move could be revenue-neutral for the city if council increased next year’s property tax rate. That would result in commercial properties paying more while the typical homeowner still saved $18.79 in annual city property tax, or $1.57 per month.

Garza and Flannigan pointed out that multifamily properties are considered commercial and thus the property tax burden would be shifted onto renters. Adler said he disagreed.

Casar, holding up six quarters over the dais, said the savings were not that much for the homeowner, but the loss in revenue for the city was substantial.

“What we’re debating today is essentially six quarters a month for the median homeowner; in my district of course it is much lower,” Casar said. “I [recognize] every quarter helps. But if we are going to do something … I would rather invest those six quarters to generate several million dollars in revenue and address homelessness in our community.”

Adler and Troxclair vowed to get the homestead exemption to 20 percent when they campaigned in 2014. Council voted for a 6 percent exemption in 2015 and increased it to 8 percent in 2016. Council said the budget allowed no room for an increase when the issue came up in 2017.