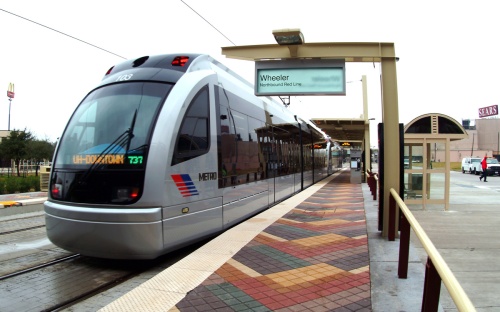 A light-rail extension that was proposed from downtown Houston to Heights Boulevard did not receive support from the Metropolitan Transit Authority of Harris County board of directors.

Not a single member of the Metropolitan Transit Authority of Harris County board of directors expressed interest at a June 27 workshop for adding a light-rail extension for Washington Avenue to the agency's long-range plan.

"I don’t sense a great deal of support for it," board chairperson Carrin Patman said.

The idea was proposed in a letter to METRO dated May 15 from Central Houston, an organization affiliated with the Houston Downtown Management District. Among other suggestions for METRONext, the transit agency's new long-range plan, Central Houston asked the agency to consider an "extension of the Purple/Green Line to Houston Avenue and continuing westward along Washington Avenue at least as far as Heights Boulevard."  However, the letter also said light-rail projects overall should take a lower priority because of higher costs.

Because the idea was not included in METRO's original planning, it did not have cost or ridership projections.

Board members acknowledged Washington's growth and development make it an attractive corridor for transit but light rail might not be the best option. A 2013 Livable Centers study proposed the idea of a street car that could make frequent stops along a fixed route, which several board members pointed out as a potential solution.

Patman and others said the agency should look to local partners, such as tax increment reinvestment zones or management districts, to help fund these types of initiatives. The Washington corridor is partially served by the Old Sixth Ward TIRZ and Memorial Heights TIRZ but lacks a management district.

"In terms of transit and infrastructure, we need a lot," Super Neighborhood 22 President Mike VanDusen told Community Impact Newspaper after a town hall meeting with METRO officials June 20. SN 22 includes the Washington corridor. "This area was platted before cars were the mode of travel—that mode had four legs. ... We need to keep improving bus service, ADA [Americans with Disabilities Act] accessibility and sidewalks."

The METRO board is expected to approve the METRONext plan in July and place an item on the November ballot asking voters to grant the agency bonding authority to help cover the estimated $7.5 billion cost of the projects. The agency is not asking for a tax increase to fund the project, but it is relying on federal funding to cover a significant portion of the costs.

A major bus rapid-transit project along I-10 connecting downtown to the Northwest Transit Center is set to receive over $189 million in federal funding from the Houston-Galveston Area Council and has received bonding authority as well. The system provides rail-like service, including dedicated lanes, signal priority and level boarding, with rail cars on rubber tires.

The agency is still soliciting public feedback on the METRONext plan.