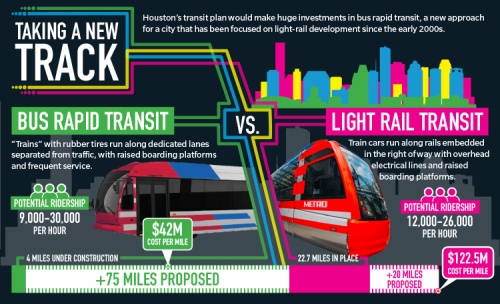 A new vision for Houston’s public transit system includes $7.5 billion in investments that would bring 75 miles of rail-like service throughout the city—without the rail.

The Metropolitan Transit Authority of Harris County’s new plan, dubbed METRONext and expected to go before voters in November, reflects a shift away from light rail, a favored approach in previous plans.

“It may not meet everyone’s wish list. They may not agree with every part of the plan, but it’s a compromise that’s trying to serve the greatest number of people and the transportation needs of our community,” said Cindy Siegel, co-vice chair of METRO’s board of directors.

In an average workweek in 2018, METRO transported 1.4 million people. That burden will grow, as the Greater Houston area is expected to add another 4 million people in the next 20 years, according to METRO projections.

“The decisions we make now could stagnate us tomorrow. We can’t be a city that stagnates because we didn’t invest,” said Houston City Council Member Amanda Edwards, who also sits on the Houston-Galveston Area Council’s High Capacity Transit Task Force.

Last year METRO officials started with a list of about $35 billion in potential improvements, including 100 miles of light rail, 90 miles of bus rapid transit and 200 miles of high-occupancy vehicle lanes.

From there, $7.5 billion made the cut in the final plan under the agency’s financial constraints. In its 2019 fiscal year, METRO is budgeted to bring in about $1.4 billion—over half of which comes from a one-cent sales tax approved in 1978—and spend roughly $1.2 billion.

Christof Spieler, former METRO board member and author of the book “Trains, Buses, People: An Opinionated Atlas of US Transit,” said the plan delivers on the highest value projects.

“In general, the resources we have are inadequate to the need. And so any plan you put out there inevitably includes a lot of things where, if we had more money you could do this or that,” Spieler said.

The plan calls for about 20 miles of light rail extensions at a cost of $2.45 billion that would connect existing downtown lines to Hobby Airport to the south and North Shepherd Park and Ride to the north.

At a cost of almost $1.37 billion, the plan also calls for upgrading the agency’s park-and-ride network, which brings in some 15,000 to 20,000 commuters in and out of the city every day. The network would operate continuously seven days a week with two-way service, making it more accessible to Inner Loop residents.

“That means that if you live in the city and work in a suburb like Clear Lake, that becomes equally useful. It means if you are commuter and have to leave the office midday or later in the day, it’s more useful,” Spieler said. “And it means you can use it for a lot of things other than work—see an Astros game, visit the museums.”

In contrast to METRO Solutions, the agency’s long-range plan approved in 2003 that called for about 63.5 miles of light rail—of which about 22 were built—METRONext puts an emphasis on bus rapid transit, or BRT. The city’s first BRT segment is set to begin service this year on Post Oak Boulevard.

Up to this point, Houston has not seen this kind of option, which functions like rail but with rubber tires instead of rail tracks.

“People have not experienced BRT,” Spieler said. “Done well, it is a rider experience that is quite similar to rail—you buy tickets at a platform, you have level boarding, you have dedicated lanes.”

Previous attempts to build out light rail were divisive. A rail line that would have gone down Richmond Avenue was sidelined after protests from businesses and lack of support from then-Rep. John Culberson, R-Houston, who added provisions to transportation funding bills to ensure a Richmond rail line would never get built.

METRONext opts for BRT in place of some former light rail routes, including the Richmond corridor connecting downtown to the Galleria area. Though an exact corridor is yet to be determined, this route has the support of community members who originally backed the light rail vision.

“We have seen that BRT does offer some advantages in terms of how quickly it could be built and that it could be done incrementally,” said Kay Warhol, who was a volunteer with a pro-Richmond rail effort in the Montrose area. “It’s much longer than originally planned, so there would be even greater connectivity.”

Designed well, BRT lines can be upgraded to light rail when the capacity demands it, Spieler said.

If final drafts of the plan are approved by METRO’s board of directors this July and the bond election is passed by voters this November, projects will take shape over the next two decades, with all aspects of the plan to be finished by 2040. Until then, projects, routes and designs are subject to change, and public input is still being factored in, officials said.

“I would tell the voters and the people in the metro area, think about sitting in rush hour traffic. ... Think about the impact in your community and the current transportation gridlock that we see. Imagine if the population doubles,” Siegel said.

As METRO works to shore up local support, the agency has a new ally in Congress in Rep. Lizzie Fletcher, D-Houston, whose backing it will need to help garner about $4 billion in federal funding to make METRONext a feasible plan.

“I have the ability to be an advocate for the transit projects that we want to do here in the region, whether it be METRONext plan or other projects emerging in our region that need federal dollars,” said Fletcher, who has been appointed to the House Committee on Transportation and Infrastructure.

“The transit system has got to benefit everyone, not just one footprint inside the city where no one else has access to connect to it,” Edwards said. “That’s not going to get the buy-in you need for a paradigm shift in funding. If you’re going to get people to buy in, they are going to have to see a benefit.”