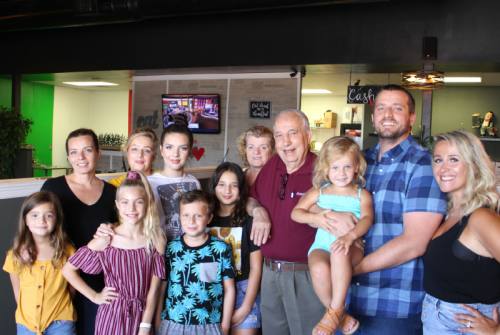 Al Morina (second from right) and his family have nbeen running Amoreu2019s Pasta and Pizzanin Grapevine since 1998.

Al Morina and his family had been running Amore’s Pasta and Pizza in Grapevine for more than 20 years when a stormy night in May 2016 almost took it all away. A flash of lightning led to a fire that closed the restaurant for nearly two years.

“It was heartbreaking, to say the least,” Morina said. “You think of all the hard work that comes into this place and what your family put into it.”

Morina’s father bought Amore’s from a family friend in 1998 because he was charmed by Grapevine’s small-town feel, Morina said.

“There was a point where we didn’t think we were going to be actually able to reopen,” he said. “It was definitely an uphill battle, but we just kept fighting.”

When the restaurant eventually reopened March 12, 2018, community members rallied. That night, a line of customers formed outside before the doors opened, and the wait ran more than an hour at times, Morina said. The evening ended as the restaurant sold out of everything.

“That small-town charm really woke up at that point,” he said.

The continual support that sustained the family during Amore’s closure stemmed, in part, from the high-quality food, Morina said. Dishes are homemade, and pizzas are handcrafted with sauces made from fresh tomatoes and flavorful herbs.

“We always try to have more local products and better-tasting items,” he said.

Morina prefers to branch out and come up with new dishes. He and his sisters meet with the chef regularly to brainstorm weekly specials. They also take suggestions from their guests.

“People always ask for different things, so people will message me constantly,” he said.

At the heart of Amore’s is the family behind it, Morina said. Morina’s parents and sisters are constant figures at the restaurant. Together, they have helped guests celebrate multiple birthdays and engagements.

“We get on a personal level [with customers],” Morina said. “It’s more than just business at that point because we enjoy what we’re doing.”