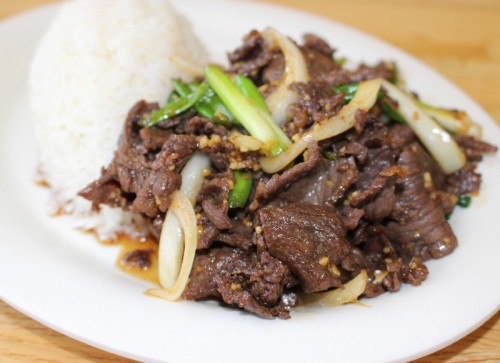 Honey Teriyakiu2019s menu includes Mongolian beef ($10.99), which is served with a side of rice.

When Scott and Ellen Choi opened Honey Teriyaki nearly a year ago in Colleyville, they wanted to bring something different to the community. From their fast-casual restaurant, the husband-and-wife duo are serving some of the foods from Scott’s childhood.

Honey Teriyaki serves Japanese fusion dishes, many of which are dressed in a signature teriyaki sauce. Diners also have the option of adding a homemade rice sauce for additional sweet flavoring—a creation unique from other teriyaki shops.

“It’s my mom’s recipe,” Scott said. “She created that stuff back about 20 years ago.”

Scott and Ellen make their own sauces and salad dressings in the kitchen as opposed to buying them from the store. In many recipes, teriyaki sauce is sugar-based, but the Chois opt to use honey as a more natural alternative in an effort to be more health-conscious, Scott said.

When cooking, Scott uses techniques and recipes he taught himself by watching his parents. His mother owned her own teriyaki restaurant in Washington, where similar restaurants thrived.

“I pretty much grew up with teriyaki,” he said.

Scott said he wanted to bring the dishes he enjoyed most of his life to the Dallas-Fort Worth region, noting a relatively small number of teriyaki shops in the area. Honey Teriyaki has garnered a lot of attention with positive reviews and referrals from community members.

“They like our service, and it’s something different that they haven’t tried,” Scott said.