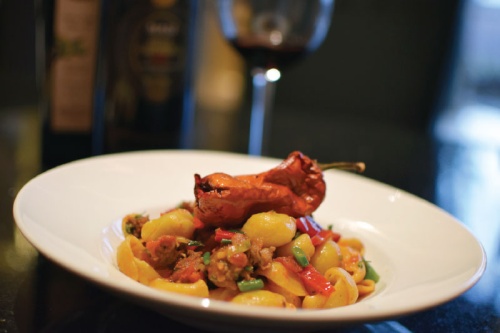 During Il Calabrese Ristorante & Bar in Southlake’s twilight between lunch and dinner, Chef Luciano Salvadore began making pasta for the possible rush to come. He said the restaurant emphasizes its Italian fare, with food and talent from the country itself.

Salvadore said the dining establishment is the product of a partnership between its majority owner, Oscar Renda, and himself, the on-site owner and chef. Upon its opening in 2012 the restaurant was introduced as Patrizio Osteria, a local extension of the Patrizio chain. In 2014 the name changed to Il Calabrese as an homage to Renda’s past in Calabria, Italy.

Il Calabrese is the first restaurant Salvadore, who is also from Italy, has owned in the states. He said he moved between Washington, D.C., and Italy for most of his adult life, owning three restaurants across the Atlantic. In America, he said the same elements make the job worthwhile.

“It’s fun, and it’s challenging all the time,” Salvadore said. “It’s always different. … [That’s] the good thing about this profession.”

Down the highway from Southlake Town Square, the two-story dining area includes two bars, several reservable spaces for larger groups, and indoor and outdoor seating. A wood-burning pizza oven spells out the restaurant’s name in tiles over the flames while, near the bar, a much larger fireplace greets customers. On the dining tables downstairs, bottles of olive oil from Calabria are meant to remind visitors of the restaurant’s roots, Salvadore said.

Salvadore said the food itself is produced from the best products available. Some come from Washington D.C. and New York. The pasta and pizza dough is made on-site, and a host of herbs and fruit­—basil, rosemary, sage, oregano, peaches and figs—are grown in a garden lining the restaurant’s exterior.

Il Calabrese often partners with the community for fundraising and charity events, Salvadore said. It has worked with and supported Carroll ISD schools and football, local food banks and golf clubs, he said.

At the restaurant itself Salvadore said he sees lots of regulars and makes a point of interacting with customers, both new and frequent. It is good for business, he said, but it also makes the job more fun. It shakes up his day.