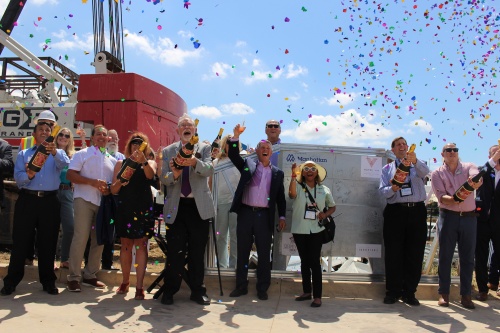 Coury Hospitality and city of Grapevine officials are showered in confetti at the Grapevine Main station's topping-out ceremony Sept. 12.

The Hotel Vin and Harvest Hall building, part of the larger Grapevine Main mixed-use development at the corner of Dallas Road and Main Street in Grapevine, held a topping-out ceremony Sept. 12. A topping-out is a tradition held when the last beam—or its equivalent—is about to be placed atop a structure during construction, officials said.

To celebrate the construction milestone, Grapevine City Council members and officials from Coury Hospitality, who are overseeing the hotel and food hall project, gathered to sign the beam as it was placed atop the structure. The ceremony also served to help kick off Grapevine's annual GrapeFest festival.

"This is such an exciting project for our company, it is going to be our flagship hotel, and this private-public partnership that we've done with the city of Grapevine is very unique," CEO of Coury Hospitality Paul Coury said. "It's a testimony to this city's vision."

Introducing the project at the ceremony was Tom Santora, managing director of the Hotel Vin and Harvest Hall project. The project is comprised of three parts, he said, the first being the 500-space parking garage, the second the 120-room Hotel Vin, which is part of the Marriott Autograph collection and includes a restaurant and event space, and finally, connected to it all, Harvest Hall, a 20,000 square-foot food hall with seven different kitchens.

The hotel and food hall will be six stories in total and is slated for completion summer 2020. The project has created approximately 120 construction jobs, Coury said, and will create 150 jobs in the hotel, Harvest Hall and the hotel restaurant.

"The central focus of this will be a meeting ground. Grapevine has always been a meeting ground," Grapevine Mayor William D. Tate said at the ceremony, citing the city's hospitality and tourism industry as well as the Dallas-Fort Worth International Airport, where people meet constantly.

The now-operating TEXRail trains, which bring passengers to and from Grapevine every 30 minutes, are expected to be crucial to the development's success, Coury said. The train station, paired with the food hall and hotel, will make Grapevine a "cultural hub," he said.