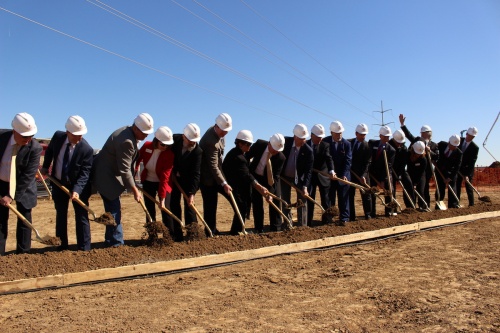 Members of the Grapevine City Council were some of the first to break ground on the transit-oriented development Grapevine Main.

“it is an exciting day,” Mayor William D. Tate said. “It’s another significant step in our long journey to advance commuter rail in our region. It represents the beginning of the cotton belt, the TEXRail, and a merger of our glorious historic past with the lifestyles of the next generation that we call the [millennials] and the urbanites. We’ve been a part of their past, we want to be a part of their future.

Grapevine Main is located at the intersection of Main Street and Dallas Road in Historic Downtown Grapevine. The scope of the Grapevine Main development consists of a 38,000-square-foot expansive outdoor plaza; a 42,000-square-foot, five-story rail station; and Hotel Vin, a six-story, 120-room boutique hotel; all supported by a 552-space parking garage.

The Hotel Vin will feature an activated lobby and restaurant, with floor to ceiling windows in the lobby overlooking the future transportation center. The Hotel Vin will be part of Marriott International’s Autograph Collection and is projected to open in 2019.

“[Coury Hospitality has] a lot in common with Grapevine,” Coury Hospitality CEO Paul Coury said. “We’re developers, but we’re storytellers. Our developments come alive through our storytelling. That to me is what a good boutique hotel is, and Grapevine has done a magnificent job telling a story. If you look at this downtown, in particular, you can see the stories told and the preservation and authenticity, and that’s what makes the city very unique.”

TEXRail is a 27-mile commuter rail project run by Trinity Metro, formerly known as The T. The rail line will run from downtown Fort Worth to the Dallas/Fort Worth International Airport.