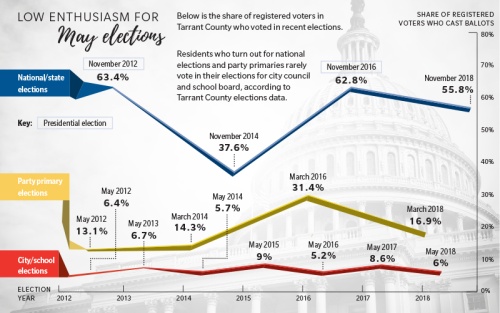 Residents who turn out for national elections and party primaries rarely vote in their elections for city council and school board, according to Tarrant County elections data.

When deciding the issues that affect residents in Grapevine, Colleyville and Southlake, some elected officials say voters arguably have the biggest influence in local elections.

From trash collection and street repairs to new schools, local voters are able to directly play a role in how their city and school district operate.

But only a small share of residents who are registered to vote will actually cast ballots in the May 4 elections, if history is any indication.

Voter turnout rates for municipal elections in Tarrant County typically hover in the single digits. In contrast, roughly nine times as many area voters there turned out for last November’s midterm elections.

This can have a profound impact on the nature of representation at the ground level of local government, said Cal Jillson, a Southern Methodist University political scientist. Low voter turnout also means that an organized group can have a greater influence on the direction of its city or school district even if its numbers are small, he said.

“That’s not bad, in the sense that those groups are welcome to turn out. They generally watch [local politics] more closely than the average voter,” Jillson said. “But at the end of the day, if the issue is, ‘Is a single-digit-[to]-mid-teen [percentage] type of turnout a sufficient democratic foundation for local government?’ I think the answer is probably no.”

Southlake’s most recent local election was a special election in September 2017, and about 9 percent of registered voters voted.

“It’s ironic to me because your local government impacts you more than, really, just about anything,” Freed said. “We make sure that you have water; we make sure your roads are taken care of, that you have police and fire services. We impact your day-to-day life probably more than any other government body.”

Permanently moving city and school elections to November along with statewide and national races comes with its own set of problems, Jillson said.

“The reason that municipal elections are held off of the major election cycle … is that they want voters—even if the number of voters is small—to be focused on local issues and not be distracted by Beto or Trump,” Jillson said.

Grapevine-Colleyville ISD trustee Becky St. John said she would not be in favor of moving elections to November for that very reason.

“Local issues will get lost in all the noise of whatever’s going on nationally—and those two things are often very, very different,” St. John said.

Voters may also be more inclined to vote if there were more items on the ballot, she said, rather than if the ballot only included school district candidates or propositions.

For GCISD, the election that brought the highest rate of resident participation in the past decade was the May 2016 bond referendum, according to Tarrant County elections data. The bond proposition drew about 15 percent of registered voters to the polls.

Residents are more likely to vote when there is controversy or a hotly contested race, St. John said.

In her most recent run for GCISD school board in May 2018, St. John finished only four votes ahead of her challenger, Amy Putnam, according a Tarrant County recount.

In contrast, the subsequent run-off election provided her a much wider margin: St. John won by more than 1,700 votes. But overall, the percentage of people who voted in the runoff election was actually lower than that of the general election.

Gamble, who is not working for any candidates this election cycle, usually tells clients to avoid political messages and appeal to voter demographics. Senior citizens, for example, are known to be active in local elections.

In a 2016 study by Portland State University, researchers found that more than half of voters in local elections in 50 major U.S. cities were age 57 or older—nearly a generation older than the median age of all eligible voters, according to the study.

“[A school district] is why people move to the community,” she said. “It is a real bedrock, a foundation, for any community.”

Some candidates pursue an openly partisan approach if they think it will help them win, Jillson said.

But St. John and Freed said they did not target a particular political group or organization when campaigning.

“For school boards, you’re talking about people’s kids—that’s the most personal thing to them,” St. John said. “You’re also having to be responsive not only to parents and their students’ education, but the community at large.”

Those who vote in local elections tend to show up reliably from year to year, Gamble said. She advises candidates to appeal more to those voters rather than try to get new people to the polls.

In terms of strategy, Freed said she can understand this advice, but she believes in reaching out to as many people as possible.

“People want to feel heard,” she said. “I think you owe every citizen the respect of responding to that.”