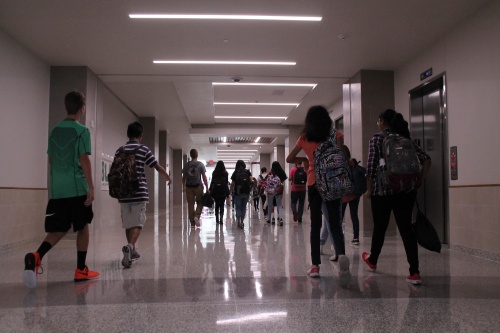 Frisco ISD already surpasses many requirements spelled out in a new state law dealing with campus security and mental health.

Senate Bill 11 was passed by the state legislature in response to a mass shooting that killed 10 people last year at Santa Fe High School in Texas. New requirements under SB 11 include a new care policy for students, a school safety committee and suicide prevention education.

FISD currently meets several requirements of the new law, but some additions related to security and mental health will arrive in the coming months in accordance with SB 11.

After the Texas Education Agency provides guidance on adhering to SB 11, FISD will need to update its emergency operations plan, establish threat assessment teams for every campus and create a care policy for students affected by trauma.

“People’s safety has to do with other people, not locked doors,” Cook said.

Schools will need to use an educational strategy supported by research to gauge students’ mental health status, according to the law. FISD does this with the districtwide Safe Schools Survey, Cook said, which evaluates eighth and 11th grade students’ experiences with anxiety, depression and overall school culture as it relates to mental health.

The survey gives FISD a snapshot of students’ experience with district staff and safety. Results show 89% of eighth and 11th graders have at least one adult on campus who cares about them.

One of the “biggest” requirements under the law is an anonymous platform for students to report concerns and feelings of danger, Cook said. FISD accomplishes this with the STOPit mobile app, which enables users to anonymously report concerns to school officials, whether it be cyberbullying, threats of violence or self-harm.

“A lot of the challenges other districts have right now in addressing some of these things in SB 11—we believe [we] address [those challenges] through STOPit,” Cook said. “We have the two-way communication; we have the ability for them to screenshot things seen on Twitter or on Snapchat.”

The app’s ability to report cyberbullying also falls in line with the law’s requirement for digital citizenship instruction, Cook said. The app allows the district to access, evaluate and act on those online concerns.

FISD included this feature in the app after David’s Law, which passed in the last legislative session in response to a San Antonio student who died by suicide after being harassed online.

“School safety has become about their online world,” Cook said.

Under SB 11, schools must also have programs related to suicide prevention. FISD offers such a program for secondary students every October.

As part of the program, students complete checkout tickets to note if they are experiencing suicide-related concerns for themselves or their peers. Campus staff follow up within 24 hours, if necessary.

“Our culture is shifting right now to even have these kinds of conversations,” Cook said.

FISD will receive a $1 million allotment over two years from the state for campus security and mental health resources.

Part of the district’s allotment will go toward suicide prevention programming.

Cook said while FISD is going “above and beyond” SB 11 requirements for mental health, the district will continue researching how to improve its mental health policies and procedures in schools.

“Maybe then, we’ll be the model for how SB 11 and all the bills afterward get shaped,” Cook said.

Each Texas school district must have a multihazard emergency operations plan in place, according to the Texas Education Code. This plan must address prevention, mitigation, preparedness, response and recovery in the event of an emergency.

Under SB 11, some changes will be made to emergency operations plans by the Texas School Safety Center. These changes will include response to a natural disaster, active shooter and other dangerous scenarios.

Following the changes, Bodie said the district might see tweaks in its emergency operations plan. FISD will also create campus-specific plans to adjust for external factors, such as nearby highways and rail lines. But Daniel Stockton, FISD executive director of government and legal affairs, said he predicts the district will adjust to the changes with a quick turnaround.

“I would think we would be able to do most of this relatively quickly because it probably won’t be that much different than what we are already doing,” Stockton said.

The district’s limited access to campus entryways eased the worry of Tammy Fox, parent of a Trent Middle School sixth grader, when her son was in kindergarten—the same school year as the Sandy Hook Elementary School mass shooting that killed 27 people, including 20 students, in Newtown, Connecticut.

“I remember that emotional walk to school the next day,” Fox said. “These things can happen.”

For certain sections of SB 11, TEA and the Texas School Safety Center have deadlines ranging between January and April to issue guidance. Stockton said guidance could come earlier, but the center and TEA are also advising districts on other recently passed  state laws.

The $1 million allotment will provide updates to campus facilities, such as security cameras, communication systems and security equipment and software, Stockton said.

TEA has until April 1 to issue guidance on these teams.

Even after receiving guidance from the TEA, the district will continue searching for ways to go above state requirements in regards to safety, Stockton said.

“We look at compliance with state law as a floor,” Stockton said. “You have to do the best for kids, and if that means we need to do more than what they’re requiring, then that’s what we’re going to do.”