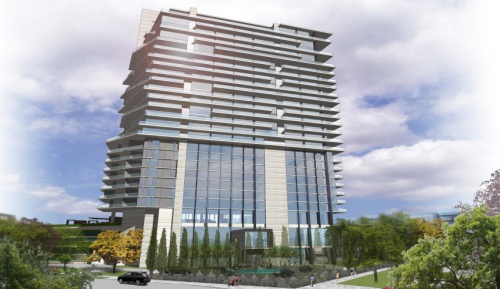 The first 130 feet of the building will be for the hotel and conference center. Above this will be condominiums.

The Gate in Frisco is adding another mixed-use project that could be as tall as 30 stories.

The building will feature a hotel with a conference center and a residential tower as well as nearby retail and restaurants as approved by the Frisco Planning and Zoning Commission at a meeting Aug. 27.

Project owners, including Dubai-based Invest Group Overseas, requested to amend a 2015 zoning ordinance to accommodate for the development. The Gate development on the northwest corner of John Hickman Parkway and the Dallas North Tollway spans over 41 acres.

The amendment also proposed to increase the development's unit amount from 1,000 to 1,131 units for more condominium units. A project spokesperson said 921 units have been constructed, are under construction or approved.

With the expansion of residential development, Planning and Zoning Commission Chair Robert Cox said he was concerned about the lack of office space and corresponding commercial development.

“I’m concerned that we’re going to have all residential here and no mixed use,” Cox said at the meeting.

Over 18 restaurants just south of the development will make up for increased residential units, Commissioner Jon Kendall said at the meeting. Several retail spots in the southern development are still vacant, he said.

“They need residential,” Kendall said. “I think residential will come when it’s needed. This needs to be built so people can develop what’s already built.”

While Commissioner Edward Kelly said he is typically opposed to added multifamily development, but the project’s close proximity to the tollway, first-class look and five-star hotel will be beneficial, he said.

“I can get excited about this piece of property,” Kelly said at the meeting. “I hope this comes out as it’s planned."