Northwest, I-35 bridge is Georgetown’s next major road bond project 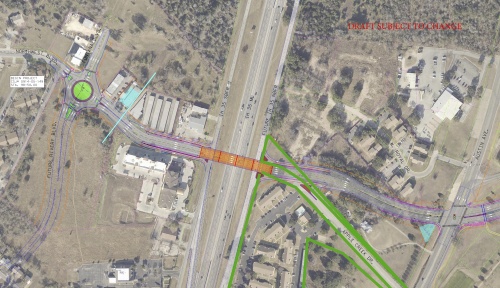 A preliminary schematic shows the proposed plan for a new I-35 overpass bridge at Northwest Boulevard in Georgetown.

Georgetown transportation planners have started initial planning work for a new I-35 overpass bridge at Northwest Boulevard, a project set to begin after crews finish an extension of Rivery Boulevard that broke ground in August.

Both projects, which are the next to be funded through Georgetown’s $105 million road bond approved by voters in 2015, are designed to help alleviate traffic along Williams Drive and support development growth along Rivery and Wolf Ranch Parkway that the city expects to continue into the future, said Ed Polasek, the city’s transportation planning coordinator.

“While it will have some immediate benefits, it’s also a long-term investment in the development potential in this area,” Polasek said.

The extensions of Rivery and Northwest are two of eight road construction projects the city will fund with voter-approved bond sales, with work scheduled to continue through 2026, Polasek said.

Along with roadway construction, the bond includes millions of dollars set aside for design work on future projects as well as sidewalk and intersection improvements.

The half-mile extension of Rivery will extend the roadway from its north terminus at Williams to a new intersection with Northwest. The new roadway segment will include four traffic lanes with a divided median as well as a traffic circle at the intersection of Park Lane.

Completing the $5.1 million project, which is expected by next summer, will pave the way for the new overpass bridge. An additional traffic circle at Northwest will mark the future northern terminus of Rivery.

The overpass bridge construction, along with several related road projects, will start following the completion of the Rivery extension. The overpass project is estimated to cost about $12.4 million.

Georgetown will manage construction of the overpass, but the project requires approval of site plans and inspection reports by the Texas Department of Transportation for the portion of the project that crosses I-35, Polasek said.

TxDOT’s role involves planning oversight and coordination of traffic control and lane closures, said Bobby Ramthun, a Georgetown-area engineer for TxDOT. Some nightly lane closures are likely while the bridge is under construction.

TxDOT will also administer a related project to realign the intersection of FM 971 and North Austin Avenue to the east of I-35, Polasek said. The project will replace an existing and somewhat disjointed intersection that should improve safety for drivers, he said.

Since part of the extension of Rivery runs through property owned by Georgetown ISD, the district has worked with the city throughout the project’s planning process.

The overpass bridge will also create a new east-to-west route to Georgetown High School on North Austin and an additional route for GISD school buses traveling across I-35, according to Kirby Campbell, GISD’s transportation director.

GISD has about 102 school bus routes that use Lakeway Boulevard, located north of Northwest, to cross I-35. Re-routing some of those buses across the future overpass bridge should help decrease traffic around Lakeway, Campbell said.

Both road extension projects combined are designed to improve accessibility and travel for businesses and residents along the Rivery corridor, Polasek said. A concept for the Rivery extension was initially developed more than a decade ago by members of the Georgetown Transportation Enhancement Corp. to support anticipated business and development growth along the roadway, he added.

Since then the area has seen several major developments, including the Summit at Rivery Park and the Sheraton Austin Georgetown Hotel & Conference Center along Rivery.

Polasek said he anticipates Rivery could eventually extend farther north all the way to Airport Road near the Georgetown Municipal Airport, depending on the growth of future development in the area and funding availability.

The 2015 road bond does not include plans to extend Rivery beyond Northwest.


A “contract with voters” approved as part of the 2015 bond set maximum property tax increases at 2 cents annually and 10 cents cumulatively through the lifespan of the bond sales, both per $100 of valuation.

The city estimated in 2015 that the owner of a home valued at $210,000, which was Georgetown’s average home value used by the city at the time, would cumulatively pay $252 in additional property tax to cover the bond sales. The tax impact estimate was subject to change based on future home values and market conditions, according to the city.

The $18.3 million project, which also included an extension of Wolf Ranch Parkway, created a new connection between Hwy. 29 and Leander Road. Its completion culminated a two-year-long construction process that was the largest roadwork project in Georgetown’s history.

A separate south segment, overseen by Williamson County, will extend the Southwest Bypass an additional 1.25 miles and open a new connection between Leander Road and the southbound I-35 frontage road. The south segment is expected to open by early 2020.

Williamson County Precinct 3 Commissioner said during the July groundbreaking of the Southwest Bypass’ north segment that developing a new east-to-west route between Hwy. 29 and I-35 will help alleviate congestion from traffic passing through Georgetown along Hwy. 29, which becomes University Avenue as it continues through the center of the city.

The largest construction project remaining on the 2015 bond after the completion of extensions of Rivery and Northwest involves widening D.B. Wood Road to five lanes between West University and Oak Ridge Drive. The project is expected to start in 2022 and finish by 2023 at a cost of $18.4 million.

In addition to construction projects, about one-fifth of the 2015 bond will pay for sidewalk and intersection improvements throughout Georgetown and future road project planning.

For the Northwest bridge project, Polasek said the goal is to have the bridge complete before TxDOT begins work on a separate project to construct a bridge at I-35 and Williams Drive to the south.