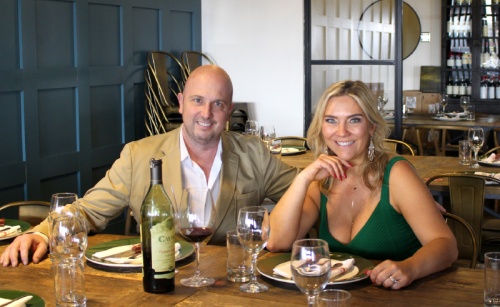 Walking into restaurant Delucca Gaucho Pizza & Wine, guests may notice a lack of menus. There are no debates over toppings, sizes, custom orders or appetizers.

Customers pay one price, $8-13.95 per child and $20.95 per person for teenagers and adults. Diners can eat all they want. Pizzas are served in rodizio style, meaning waiters circulate the room to offer slices of handcrafted pizza, co-owner Evandro Caregnato said. Caregnato, who moved from southern Brazil, said this concept is the norm in that region.

Caregnato is an established figure in the culinary world. He authored a cookbook, “Churrasco: Grilling the Brazilian Way.” Churrasco means barbecue in Portuguese. Aside from recipes, the book also includes a description of southern Brazil’s culture, people and history.

Caregnato is also the former culinary director of steakhouse Texas de Brazil, which he helped found. He left that position when he and his wife, Vanderleia “Dede” Mallmann, decided to open their own restaurant.

Delucca Gaucho boasts a full bar, and meals come with complimentary appetizers.  There are about 20 different pizzas, including dessert ones made with Nutella, fruits or dulce de leche and toasted coconut.

“The most requested [toppings are] the lamb with sumac onions, the garlic steak, the Mexican elote and the pepperoni,” he said.

Everything is homemade with fresh ingredients, he said. The pizza dough has only five ingredients: Italian flour, salt, olive oil, yeast and water. Every day, staff prepares the cheese for the pizzas by hand.

The restaurant’s service  and dedication to quality has drawn diners from beyond Southlake city limits.

“Actually, we were not expecting people to like it so much,” Caregnato said. “They tell us every day.”

Less than a year after the restaurant’s debut in Southlake, the couple opened another location in Dallas. Two more are expected to follow in Fort Worth and Plano in 2020.

“What we’re trying to do here, as much as possible, is to be very simple [with] minimally processed food,” Caregnato said.