Real estate developments under construction in 2019 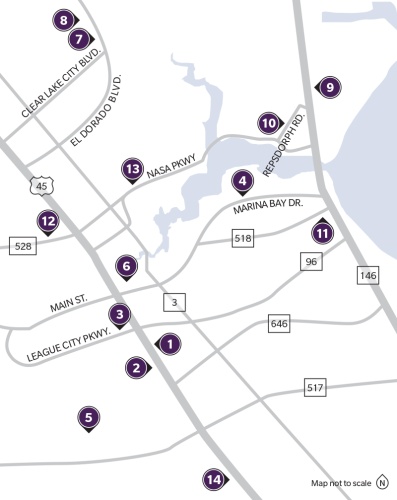 This $156 million expansion at 2240 S. Gulf Freeway, League City, includes the addition of five stories and 60 hospital beds, bringing the total up to 97 beds. A new parking garage with an additional 740 spots opened in July. The project will be complete around May 2020.

Contractors are in the process of starting Phase 3 of this 100-acre mixed-use development along Gulf Freeway between League City Parkway and FM 646. Phase 3 includes sidewalk cafes and mixed uses of residential apartments with retail and office spaces. The park will have a closed-off area for small performances, such as plays and small concerts. A hotel is also under construction.

This 38-acre development at League City Parkway and Hobbs Road is nearing completion with a phase that will include a True Value Hardware store, dollar store, liquor store and dry cleaner. If construction does not finish in 2019 layout and design will at least be completed.

In the early 2000s three landowners—the Lloyds, Duncans and McAlisters—began planning unit developments with retail, residential and other uses on the west side of I-45. City officials expect in 2019 to begin rezoning tracts of the 5,000 total acres and figure out how to put in utilities and infrastructure necessary to develop the land. Actual work could begin by the summer.

This 58-acre development along North Wesley Drive includes plans for a 90-slip marina, a hotel, townhomes, restaurants and spaces for offices and retail. The developer has begun preparing to put in the bulkhead along Clear Creek.

About 300,000 square feet of retail space is under construction at Clear Lake City Boulevard and El Dorado Boulevard. A 100,000-square-foot H-E-B is already open to anchor the development. Other businesses, such as TJ Maxx and Famous Footwear, are also open, and leases are pending with other businesses.


8) The Reserve at Clear Lake City

This 372-acre residential development near Clear Lake Marketplace plans for 773 new homes, a community center and several parks and nature trails. The development will feature villas to large estates. More than 220 homes have already been built. It is expected to finish by 2020.


9) The Commons at Seabrook

This site along Hwy. 146 in Seabrook has 70,000 square feet of leasable space. The developer is working on Phase 1 and seeking retail companies to move into buildings that should be up by March.

This development along Repsdorph Road has only two businesses in place: CVS and Autozone. The developer is looking to attract more retailers before doing more construction. Officials hope a grocer anchors the site.

This $16 million, 79,000-square-foot retail center along FM 518 near Hwy. 146 is practically complete with Marshall’s, Ross Dress for Less and other shops. An owner of a 4-acre tract of land adjacent to the development has expressed interest in the city annexing the parcel to develop another retail shop.

This 28-acre development along FM 528 and Genesis Boulevard includes spaces for retail, offices and health care facilities, many of which have already been built. Throughout 2019 several more buildings will be built on a remaining 6 acres. An 8,000-square-foot baseball training facility; a two-story, 20,000-square-foot office and retail building; and 12,000-square-foot and 18,000-square-foot buildings are all underway.

This 334-unit multifamily project along NASA Bypass and Nassau Bay Drive is still underway and expected to open this summer. The apartment will offer resort-style accommodations including three pools, outdoor kitchens, business and fitness centers and more.

This development is a decade in the making. The plan is to build 7,000 residential units, 400 of which have already been constructed, along Lago Mar Boulevard in Texas City. The development will have a 12-acre Crystal Lagoon, which will open in spring 2020, and 250,000 square feet of retail space.